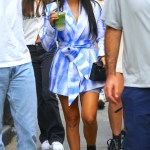 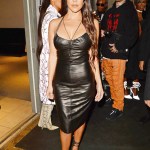 Contrary to what Kim Kardashian once said, Kourtney looked like a rock star in Miami! She emerged from a Rolls-Royce in a sultry top and hard-to-miss yellow pants on Dec. 3.

Kourtney Kardashian, 40, was definitely exciting to look at as she stepped out for a shopping trip in Miami on Dec. 3. The Poosh founder added a touch of provocativeness to her outfit in a halter bodysuit, which she paired with bright yellow trousers. Kourt’s mode of transportation — a luxurious green Rolls-Royce with its top down — contributed to the overall sauciness of this look. Still, Kourtney is never one to overwhelm her statement piece with even more accessories competing for attention. She kept the rest of her look relatively subtle with a black saddle shoulder bag, black shades and a low ponytail.

Ironically, Kourtney served this look right by her sister Kim, 39, the very person who said that the mother of three was “the least exciting to look at” in an Aug. 2018 episode of Keeping Up with the Kardashians. While we disagree with Kim, she certainly has the credentials to judge what’s interesting and what’s not. Always one to deliver an “exciting” look, Kim did just that in Miami when she left the city’s Setai hotel rocking scaly flare pants with ribbon detailing running along the legs, along with a Virginia Beach T-shirt that she transformed into a crop top. The sisters’ good friend Jonathan “Foodgod” Cheban, 45, also tagged along for the sunny outing (the $400,000 Rolls-Royce actually belonged to him).

Despite their steady stream of fights on KUWTK, Kourtney and Kim have been able to put aside their differences to be travel buddies! Right before this trip to Miami, the sisters spent time in Japan, and Kourtney brought a suitcase full of fashionable outfits along with her. She showed off her PVC bell-bottoms that she rocked in Tokyo on Dec. 1, and even showed sisterly solidarity by swimming in Kim’s SKIMS shapewear at a hotel pool. Kourt’s three children Mason, 9, Penelope, 7, and Reign, 4, also enjoyed the neon sights of the Asian metropolis.

Two days before checking out Miami’s storefronts, fans saw Kourtney give Kim grief once again on the Dec. 1 episode of KUWTK. Kourtney chastised Kim for stocking her office with plastic water bottles, but the environmental activist faced the wrath of Twitter after she was caught drinking from a plastic water bottle in the very same episode! Kourtney’s defense? “I was in Kim’s office and that’s all that was there 😹 and no I’m not perfect, but I could have brought a reusable bottle for the day, this is true,” she tweeted.