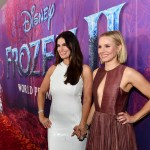 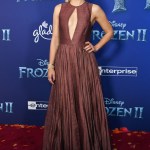 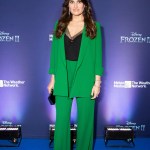 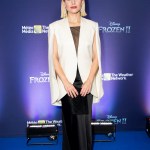 Your move, Disney. Kristen Bell is down to make at least three more ‘Frozen’ movies AND a Hollywood Bowl show, she revealed in a new interview. The ball’s in Disney’s court to make it happen!

Elsa and Anna’s adventures in Arendelle and beyond will continue — if Kristen Bell has anything to do with it. Frozen 2 premiered just days ago, but the star is already jonesing for another sequel.. or two, or three. Kristen, 39, confessed on The Kelly Clarkson Show that the only thing in the way is Disney itself! “Well, listen… even though I have zero authority and no control, I would like to formally announce Frozen 3, 4 and 5. And I just want Disney to hear that — that I’ll be showing up and I’ll be in the [sound] booth regardless, so let’s do it! Let’s do it! Again, I have no control, but I would like to formally announce it.”

Kristen, who voices Princess Anna in both Frozen films, has another plan in place if Disney decides to kick her out of the booth while she’s recording her self-written Frozen 3 lines. She revealed on Kelly that she and the rest of the Frozen cast — Idina Menzel (Elsa), Jonathan Groff (Kristoff), Josh Gad (Olaf) — have discussed putting on a live show at The Hollywood Bowl. “We have talked about this,” Kristen confessed. “Between the music from the [first Frozen] and the second one that we all know and love, there’s a couple songs that have been cut that no one’s ever heard [as well.] We’ve been talking about maybe doing, like, a Hollywood Bowl, maybe televising it perhaps next year with all of us.”

So exciting! Idina, Jonathan, and Josh are already seasoned Broadway pros, but Kristen’s got her live performance skills down, too. They just performed Frozen on the streets of LA for an episode of Crosswalk the Musical, and killed it! So, where can we get our Hollywood Bowl tickets?