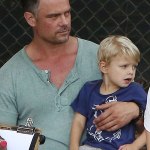 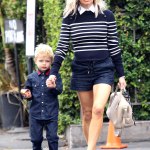 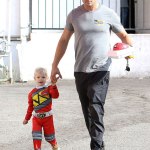 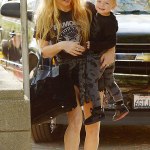 So grown up — Fergie shared a series of rare snaps, featuring her son, Axl, on a family outing in Santa Ynez Valley and he has gotten so big!

Fergie‘s, 44, son Axl, 6, is growing up so fast! The “Glamorous” singer shared a slew of pics on Nov. 24, featuring her six-year-old son, on a sweet family outing at Fergie and her father, Pat Ferguson‘s, winery, Ferguson Crest in Santa Ynez Valley, CA. In the snaps, Fergie and her son look like they were having a blast, playing around at their family winery and enjoying the stunning fall weather. Axl’s blond haircut looked so cute and his pop star mom looked amazing in a black T-shirt, jean shorts and Fergie Footwear booties. Fergie’s dad even go in on the action, too! The winery co-owner posed for a few pics with his daughter and grandson, and the trio looked so thrilled to be spending a relaxing, fun day together. “Harvest 2019,” the “Fergalicious” singer captioned the series of photos, before tagging the winery.

As fans know, Fergie, born Stacy Ann Ferguson, shares Axl with actor Josh Duhamel, 47. The couple married in 2009 and welcomed Axl in August, 2013. While the A-list Hollywood couple appeared to have a steady relationship, they separated by 2017 and, subsequently, Fergie filed for divorce in May 2019. Despite what appeared to be a long, drawn out and arduous process, the couple have continued to make their six-year-old a major priority since their split. In the days following the news of their divorce, Josh was actually spotted out and about with Axl, enjoying some quality time together!

And it appears that things between Fergie and the Transformers star remain quite amicable, as well. “Fergie and Josh have nothing but love and respect for one another,” a source close to the former couple shared EXCLUSIVELY with HollywoodLife in June 2019. “There has never been and continues to not be any bad blood between them. They’re totally fine and can be in the same room together even with their respective families and it’s nothing but cordial and amicable. They consider one another friends and there’s no drama.”

It’s so fun for fans to finally get a glimpse of Axl for the first time in a while! The little tyke is growing up right before fans’ eyes and getting more adorable every day. Knowing that his parents are putting their son first and maintaining a friendly relationship just makes the impromptu photo session that much sweeter. Fans cannot wait to see more of Axl as he continues to grow up!