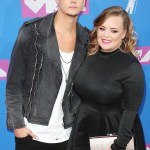 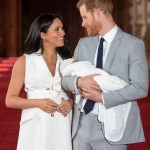 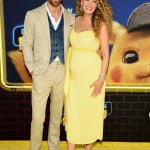 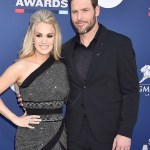 Hallie Jackson, 35, announced her pregnancy in the cutest way! The NBC reporter was filling in on The Today Show with host Willie Geist, who asked if she had some news to share in the weekly Sunday Mail segment. The host then revealed she had taken her family Christmas photo with husband Frank Thorp early this year, which showed her holding a baby onesie saying “Guess What?” as Frank kissed her on the cheek. Their adorable dog got in on the action, too, snuggling up on Frank’s lap and giving the camera some serious face! “We are so excited!” Hallie gushed, revealing that her first baby is due in April.

“I feel awesome, but a lot of exhaustion the first trimester — but we’re halfway there,” she continued, as Willie reminded viewers that she had been pushing through the pregnancy with “19 hour days” at the White House. Willie then asked if her royal blue dress meant anything, but Hallie quickly explained that it was a “decoy dress” because she didn’t have a pink one — but confirmed she is expecting a baby girl! Previously, the brunette teased her fill-in appearance with “very special surprise” on Twitter Saturday, Nov. 16. Frank also works at NBC alongside his wife, covering Congress and shooting film and digital content, according to his Instagram bio.

“Overwhelmed with gratitude for all the love and support,” Hallie later shared on Twitter. “Thank you, truly. and a shoutout from Frank and me to  @TODAYshow &  @WillieGeist for making this morning memorable (and a bonus surprise cameo from @hodakotb!),” she added, including a sweet photo of Hoda Kotb — who became a mom for the first time in April — embracing her.

Hallie later shared her Christmas card photo on Twitter and Instagram, adding the caption “our best adventure yet,” as Frank wrote “Every day is an adventure with @hallie_gram by my side, and I can’t wait to show this little person the world as a family!! Sleepless nights start in April!”

our best adventure yet. 💜 cc: @frankthorpv

Fans immediately started congratulating the couple, writing “Hallie, being a mom is magical. It will make your heart grow in ways you didn’t even know was possible and it will make you a better person. Congratulations and wishing you a healthy pregnancy and babe. 💗” and “I’m so delighted for u.” Congratulations Hallie and Frank!