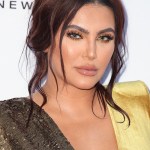 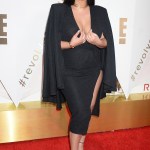 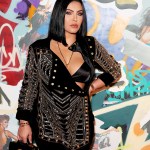 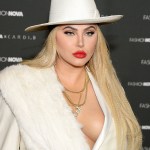 HRUSH has no time for her haters. Instead, the longtime KarJenner makeup artist will just ‘Wish Em Well,’ and she tells us EXCLUSIVELY why she decided to put down the brush and pick up the mic.

“I just take it easy / no beefin’ in my bikini / all these bitches want this fire /, but they don’t have got the Khaleesi,” raps HRUSH (aka Hrush Achemyan) on her new track, “Wish Em Well.” The makeup artist, best known for painting the mugs of Kim Kardashian and Kylie Jenner, had a secret passion for music, and it’s on full display in her first music video. The colorful visual for “Wish Em Well” sees HRUSH hold court in her own Garden of Eden, in a closet more massive than most NYC apartments, and on the dance floor.

“Music has always been a part of my life, but this is the first time I’m stepping into the industry,” Hrush tells HollywoodLife EXCLUSIVELY. “I know there will be haters any time someone steps out of their ‘lane,’ but I’ve put the work in and my spirit into this project. For anyone who has something negative to say, I’m moving on and wish ‘em well. I’m super excited to commit to my artistry and release an EP in 2020.”

“I was very honored to work with another independent, boss female to produce this track with in Qveen Herby,” HRUSH tells HollywoodLife. “She got me and my story. It’s all reflected in the lyrics of the song.” In addition to Qveen Herby, HRUSH worked with vocal producer Nick Cooper (Nicki Minaj, Pia Mia, Ciara) on this upbeat, catchy slice of hip hop.

As expected, the makeup and styling are on point. There are moments when HRUSH looks like Kim’s double, and in another moment, she’s channeling Kylie. When she goes blonde, it’s as if Hrush’s BFF Khloe Kardashian has stepped in to spit a verse. Whether or not HRUSH influenced the KarJenners’ swag or vice-versa doesn’t matter, as the jam is a fun bop that is out for all those boss women who’d rather wish their haters well than pay them any mind.

Though this is HRUSH’s first foray into music, she comes from a musical background. While growing up in Armenia, she watched her mother – an aspiring soprano opera singer – rehearse in opera houses across the country. Yet, the fall of the Soviet Union forced HRUSH and her family to flee to America and start their lives from scratch. HRUSH gives love to her mother, both by referencing her in the lyrics and rapping in Russian.

The song also addresses her recent health struggles (“When the shit got rough had to switch my lights on ‘cause I made a couple plays almost lost my life on.”) She suffered near-death experience following complications from a cosmetic surgical procedure. After coming so close to death, HRUSH isn’t wasting any time or opportunities to follow her passions. Expect her to release her debut EP some time in 2020.