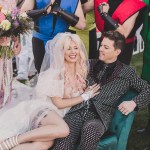 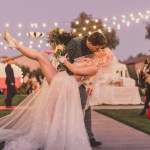 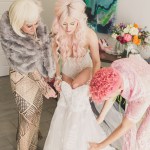 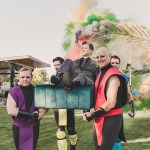 JD Scott and Annalee Belle opened up to HollywoodLife EXCLUSIVELY about their unique Las Vegas wedding and shared stunning EXCLUSIVE photos with us from the big day!

J.D. Scott and Annalee Belle Dunn are huge fans of Halloween — so it was only fitting that they got married on October 31, 2019, which was exactly one year to the date of their engagement! The happy couple shared EXCLUSIVE photos from the wedding with HollywoodLife, and you can check them out in the gallery above. The nuptials took place in Las Vegas, with about 180 guests in attendance. Of course, that included J.D.’s younger brothers, Drew and Jonathan Scott, along with their significant others, Linda Phan and Zooey Deschanel. And — since it was Halloween — all the guests were urged to dress up in costumes.

“It was such an important thing for us,” Annalee admitted to HollywoodLife EXCLUSIVELY. “We really emphasized people not cheaping out and buying half-way costumes. We wanted people to really get into it, and we were adamant about no one bringing gifts. We said, ‘If you feel the need to spend more money, spend it on your costumes.’ I feel like everybody really took that to heart.” J.D. added that it was “surreal” to see everyone in their costumes, but explained that his favorite part of the whole day was saying his vows to his now-wife.

“I only got about halfway through mine before I started blubbering like a baby,” J.D. revealed. “But I think up until that point it was very romantic!” However, Annalee assured him that the fact that he cried made the whole moment “even more romantic.” J.D. actually didn’t even write his vows until the morning of the wedding, while Annalee said she penned hers the night before, around 4:00 a.m. “It just came to me all at once,” she gushed. “I didn’t even really have to correct anything.”

Meanwhile, as all the guests were in costumes, Annalee kept things pretty traditional when it came to her bridal style. She wowed in TWO different white looks throughout the day, and had a hand in designing them both. “The first dress I got at Brilliant Bridal,” she told us. “I had sent them pictures of what I wanted, and they actually pulled from some of their other locations and had it sent to their Vegas shop. That dress I wore to the ceremony was the first dress I tried on, and it was so perfect. I cried when I put it on.”

The second dress, by Dona Matoshi, was shorter, as Annalee said she wanted to be free to dance at the reception without a long train holding her back. “I had been following this designer in Kosovo and commenting on her stuff, and she just reached out to me one day and asked if she could design a dress for me,” Annalee revealed. “So I sent her pictures of what I wanted and she made that and sent it. I loved it.”

Tell us about the first dance. How did you guys pick the song?

Annalee: We actually wanted to do the Napoleon Dynamite song. We were going to try to learn the dance, but things got busy and we didn’t really get into that. So we had a few songs that we both really love, and we actually decided day of, I think.

Annalee: The night before! We decided on “Everywhere” by Fleetwood Mac.

J.D.: It was a DJ playing but she was playing all of our music. We specifically sent her a playlist, which I worked on for hours one night, of all of our favorite music. So it was great. Like we were at a club of our music.

And what about the cake? Were you guys hands-on with the design? How important was that part?

J.D.: Well this is important to be specific about — it wasn’t one cake, it was three cakes. We decided quite early on that, instead of having a main course meal, I wanted the dinner to be cake. So we went in and did two testings. We tried all these amazing flavors at Showboy Bakery in Vegas. They made up these cakes that were phenomenal and perfectly fit our style.

Annalee: It was flavors that we normally would not even choose and were so delicious that we changed our mind at the second tasting.

Annalee: Then we had strawberries with champagne icing. We had vanilla. Just regular.

Annalee: And then we had a gluten free chocolate with chocolate frosting.

J.D.: So there were four flavors. There were three actual cakes, but they also did, like, a flat cake of another flavor.

J.D. and Annalee also revealed that they will BOTH be taking each other’s last names now that they’re a married couple. “I was pretty excited about that,” Annalee gushed. “Our relationship has been so solid for a long time. I can’t say there’s anything new I’m looking forward to, but just knowing that he went the extra mile with the name change is huge.” So, J.D. will now be known as J.D. Dunn Scott!