Kylie Jenner, 22, has done it again! The makeup mogul always goes all-out on Halloween, and she slayed once again in 2019. This year, Kylie channeled Ariel from The Little Mermaid, and she got it just right. Of course, she rocked a red wig to mimic Ariel’s iconic red hair. She also wore a strapless, seashell bra top, along with a sequined green skirt that featured a slit entirely up one thigh. Her arms and chest were covered in a sheer, fishnet material, and she wore dangling earrings to complete the look. She even sported colored contacts, too!

There’s no Ariel without Flounder, though, and Kylie made sure to keep the character’s fishy BFF close by — she carried a purse shaped just like Flounder! The yellow and blue bag was also sequined, and Kylie held it up against her body as she posed for sexy photos in her full ensemble. She got ready with her bestie, Stassie, who dressed up as Cinderella for the holiday. Meanwhile, Sofia Richie channeled Sleeping Beauty, so perhaps the ladies’ entire girl gang dressed up as Disney princesses for whatever event they were attending!? 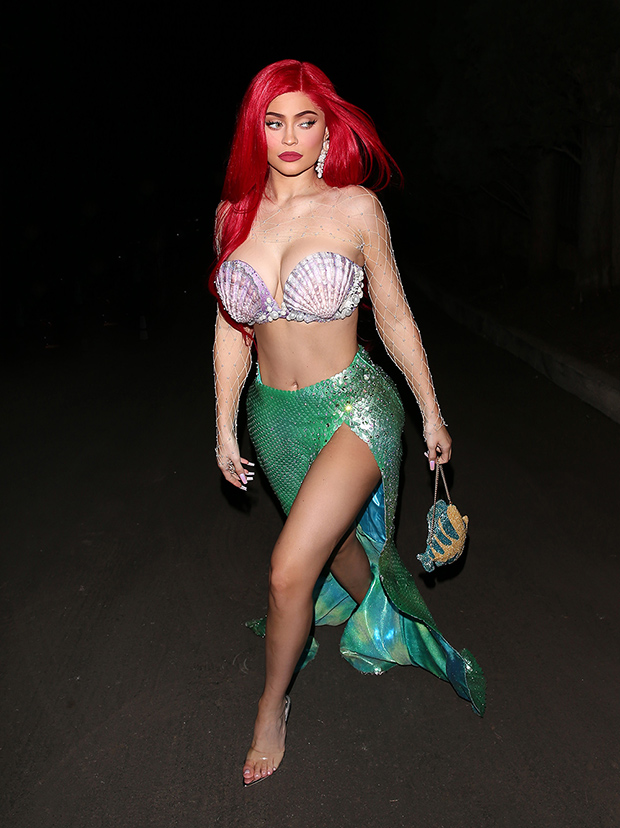 This wasn’t Kylie’s first costume of 2019, though. Earlier this week, she went to a Playboy-themed party, and dressed as a super sexy Playboy bunny. It was a pretty basic costume in theory, but of course, Kylie made sure to take things up a notch and make it hotter than ever!

It’s no secret that Kylie takes Halloween very seriously, so we can likely expect to see her in even more looks now that the holiday is here. Plus, of course, she likes to go all-out when it comes to her daughter, Stormi, as well. She’s already dressed Stormi up in a toddler version of her own 2019 Met Gala look this year, and we can’t wait to see what other costumes the little one wears!