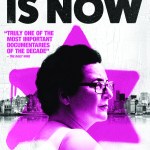 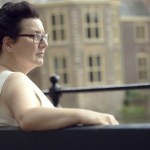 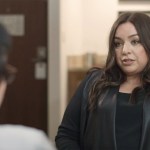 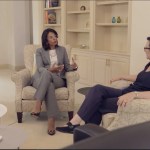 If you think that the Holocaust, in which 6 million Jews were massacred by the German Nazis, could never happen again, you need to be aware of surging anti-semitism, warns filmmaker Evelyn Markus.

When Evelyn Markus’s mom, Josephine, was still a teenager growing up in the Netherlands in 1940, she giddily got engaged to a handsome young man, Jules, who fell in love with her at first sight. It was her talent playing piano that attracted him to the lively young woman. Little did the couple know, that their happiness would be very short lived after the German Nazis invaded their homeland on May 10th of that year. That’s because Evelyn’s mother and her fiancé were Jews, and the Nazis made their lives harder and more restricted, by the day Jews were banned from public transportation, public parks, theaters, pools, and public schools. Finally, they were forced to wear yellow Stars of David on their coats and jackets. When the Nazis started rounding up Dutch Jewish citizens and putting them on trains heading east to “mysterious camps,” Josephine’s ex fiancé’s family went into hiding. Josephine and her family were shipped to a work camp, where they lived in terror of being sent on to one of the Nazi’s now infamous death camps, like Auschwitz.

A miracle, literally, saved Josephine and her family from being gassed to death. American troops liberated the crowded train they were packed into on their way to be slaughtered. Little did Jules and Josephine, who reunited after the war ended, imagine that the vicious anti-semitism they survived under the Nazis, would explode again in Europe and now the United States in the 21st century. But sadly, it has and in response their daughter, Evelyn, has co-created and co-directed a disturbing but very important documentary, ‘NEVER AGAIN IS NOW,‘ about the escalating rise of anti-semitism.

Yes, the scourge of anti-semitism, is here and it’s deadly. In the US in 2017, anti-semitic incidents soared by nearly 60% according to the ADL’s 2017 Audit of Anti-Semitic Incidents, a record breaking one year increase. And in 2016, the incidents were already up 41%. Then on Saturday, October 27, 2018, as Sabbath services were underway, a right wing extremist, screaming “All Jews must die,” burst into the Tree of Life Synagogue in Pittsburgh, PA and slaughtered 11 innocent worshippers and wounded four others.

Meanwhile, in Evelyn’s home country of the Netherlands, anti-semitic incidents were up 19% in 2018, but that’s after at least a decade of growing and alarming activities Eight-nine per cent of Jews now living there as well as in European countries like Germany, France, Italy, Spain and the UK, believe anti-semitism has increased in their country, to the point that almost half now fear being insulted or harassed in public, because they are Jewish.

Evelyn and her partner Rosa, were so disturbed by the rising anti-semitism that they were experiencing in the Netherlands, that they fled their home country to live in the US in 2006. Unfortunately, since the election of Donald Trump in 2016, Evelyn and Rosa first watched with horror as anti-semitism exploded, and Evelyn decided to do something to warn people. Evelyn began working on their documentary, ‘NEVER AGAIN IS NOW,‘ “My big concern is that I find the beginning signs which I saw in Europe of rising anti-semitism coming here as well,” Markus told HollywoodLife in an exclusive interview. “That explains the film’s title, ‘NEVER AGAIN IS NOW.’ “There was one important lesson my parents told me from their experience during the Holocaust”, Markus relates.” I used to ask them as a child, “Why did nobody stop Hitler?” He was already saying what he was going to do from the end of the 1920s. Why did everybody wait until 1940 to take him on, and then he was so strong he couldn’t be stopped…by the time we believed what he was saying, he was already too strong. So the lesson I draw from my parents’ experience is we should curb anti-semitism early on, which means now.”

When you watch Markus’s documentary and see the scenes of Palestinian-supporting protesters raucously marching through city streets in the Netherlands and not just denouncing Israel, but also Jews, it is very easy to understand Evelyn’s alarm.

Protests like these have become common in both Amsterdam and The Hague, the country’s capital city. Synagogues there have been vandalized and Jews have been harassed and attacked on the street. Evelyn and Rosa’s apartment door was defiled by a spray painted pink Star of David.

Here, in the US, Markus watched in horror, like many Americans, as white supremacists marched through the streets of Charlottesville, Virginia, chanting “Jews will not replace us,” on August 11, 2017.

When Donald Trump excused the violence that ensued, including the death of peaceful counter protestor Heather Heyer, 32, by saying “There were very fine people on both sides,” Evelyn, like many others was gutted by his refusal to stand up to white supremacy and anti-semitism.

Evelyn points out that disturbingly, anti-semitism is now being fueled from three different groups: far right white “nationalists” and white supremacists, extremist Muslim groups which extend their hatred for the Jewish state of Israel to hatred of all Jews and third, anti-semitism also comes from the far left, which sees Israel as an oppressor of the Palestinian people. The far left groups however, are not concerned with how the formerly robust Jewish and Christian communities in almost all of the Arab nations have had to flee for their lives. Nor are these far left groups protesting the oppression of the LGBTQ communities in most of the Arab countries. “It’s not ‘en vogue,’ (these oppressions) don’t fit a certain narrative,” Markus notes wryly.

‘NEVER AGAIN IS NOW‘ features interviews with courageous modern Muslim female activists, Qanta Ahmed and Ayaan Hirsi Ali, who are ardently outspoken against the anti-semitism that they have seen growing in Muslim communities, as well as with Ben Shapiro, a deeply conservative American political commentator who is Jewish and is also extremely concerned about the growing anti-semitism in the US, especially from far left groups on college campuses.

While Markus doesn’t share Shapiro’s views on many issues, she welcomes his support. “I find plenty of people on the spectrum that maybe I agree with on the anti-semitism point, but don’t agree with on other points. I know that during World War II in Holland, my father was saved by evangelical Christians. Others I know were saved by communists. Do I agree with everything evangelical or communists believe? No, but I’m very grateful to them,” Evelyn explains.

So how do you recognize whether a political leader or anyone else is anti-semitic? Markus says to watch for the three Ds: