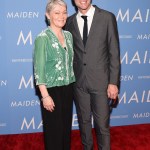 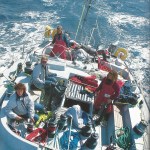 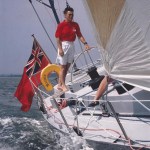 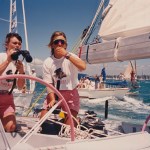 Talk about making waves. A new documentary, Maiden, about the first ever all female crew to defeat skeptics and enter an around the world race in 1989, will inspire you with awe.

Tracy Edwards was just 24 and a high school dropout when she decided that she would helm an all female crew and enter the legendary Whitbread Round The World Yacht Race in 1989. The English native wasn’t a world class sailor, had no money to buy a sailing boat AND there had never been a female crew ever in the 32,000 mile race across some of the most dangerous seas in the world.

But Edwards who had worked on many charter boats was determined to prove that women could succeed at what had been a male only endeavor until that point. Her quest and success against all odds, is now the subject of a gripping new documentary film, Maiden, directed by Alex Holmes, which is opening across the country this week. The film gets it’s title from the name of the boat which Tracy eventually bought by mortgaging her home. It is an absolute must see, both because of the remarkable and inspiring true story and the equally remarkable on-board original footage shot by crew member Jo Gooding.

“It was an astonishing sea bound adventure,” director Alex Homes told HollywoodLife in an EXCLUSIVE interview. He explains he got the idea of making the film immediately while he was at his 11 year-old daughter’s elementary school graduation, and Tracy Edwards, who skippered the Maiden, gave a speech to the class.

“There were three elements that were key,” to why Holmes was instantaneously mesmerized by Edwards story and determined to make a film about it. “It involved crossing some of the most challenging oceans in the world. Secondly, they had done it in spite of people telling them they shouldn’t do it. In order to get to the start line, they had to overcome all sorts of opposition… and the third element was that Tracy wasn’t a perfect pupil. She hadn’t been a golden girl. She had been a troublesome child, she had been thrown out of school… but nonetheless, she had a dream, and because she followed it, she was able to achieve something incredible.”

Holmes was inspired by Edwards message that, “If you have ambition and if you have dreams, then if you follow them and don’t listen to people who try to dissuade you… then something good and interesting will happen. You can achieve great things.”

Maiden, the film, follows Tracy Edwards from her idyllic childhood, to her troubled teen years after her father passed away, to her years as a dropout working in Greece on charter sailboats where she learned her sailing skills while cooking, cleaning and bartending, to the life changing moment when she heard about the epic sailing event in the world — the intensely challenging over 5 months long, globe circumventing ‘Whitbread Round The World Yacht Race.’

It was a virtually male only event and the intrigued Edwards had to beg and plead to finally land a job as a cook and cleaner on one of the boats. The experience gave her a dream and made her determined to put together the first ever all female sailing crew to enter the next race, which would be held in 3 years.

The film tells her story as she puts together a crew of deeply committed women to sail the boat, and then the near-impossible task of raising money to buy a boat, and stock it, and then through the arduous and at times harrowing journey around the world.

What’s as striking as the dangers that Tracy and her crew faced as they sailed through storms, through icy Arctic temperatures and through a near sinking of the boat, were the obstacles that they faced on land. The most jarring aspect of the film, at least to today’s audiences, was the overwhelming sexism that Tracy and her intrepid team faced.

“The shock to me was the entrenched patriarchy, in the tradition and history of the race,” Tracy told HollywoodLife.com in an EXCLUSIVE interview. “We entered this swashbuckling world where we were not supposed to be and the guys did not take kindly to it.”

The women’s team could not get sponsors and the press predicted endlessly that they even if they began the race, they would fail – that women couldn’t possibly succeed because, “They don’t get along,”  that we would squabble.”So there were unexpected things that we had to overcome,” she said. But “At the end of the day, fighting to get to the start line made us into a tight adhesive bonded group that would battle pretty much anything that moves.”

Finally, Edwards got the last chunk of money the team needed from King Hussein, who she had randomly met when he chartered one of the boats she had crewed on. The king who Tracy tells us was a “visionary”, had kept in touch with her over the years and encouraged her dream. “He saw something I did not see in myself. When I spoke to him about putting an all female crew together, he did not take a breath and he said — “It is a great idea and of course, you must do it.”

While the sailing world and the press predicted that the Maiden wouldn’t even complete the first leg of the race and the crew would be too busy applying makeup and worrying about their wardrobes to race, the women only focused on sailing… fast, and taking the sometimes most dangerous routes, to get to their destinations first.

“They were unbelievably committed… they were racing,” points out Holmes. “They had a single goal, which was to do the very best they could do, and if they could, to win.” And in fact, the Maiden, to the absolute shock of all it’s critics, did win two legs of the race in their class of boats. Equally surprising to viewers, is that despite terrifying conditions that Tracy and her team faced, especially in the freezing South Seas, they never expressed fear. “We weren’t frightened doing the race, we trusted each other,” explains Tracy, who was the navigator through the race.

“You have to remember these women had adventurous spirits before they ever stepped on the boat,” adds Alex, who says that when he interviewed the crew for the doc, that what they remembered was “the exhilaration of it, just how exciting it was to be sailing in those seas, even though they were deadly.”

Holmes’s film, which could very likely be an Oscar contender, takes you right into the waves and onto the boat thanks to all the film shot on the journey, which he recovered after a painstaking global search. What is truly epic is the finale of the race by which time the Maiden had captured the awe and respect of the world and had become a huge inspiration to girls and women everywhere.

By then, Tracy and her crew, who had set out to fulfill personal dreams, realized that they had accomplished something much more for all of womankind. Just wait until you see Maiden’s final scene. Maiden is opening in theaters across the county so check your local listings.