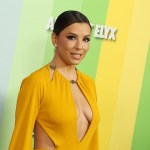 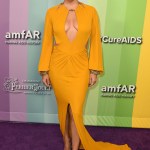 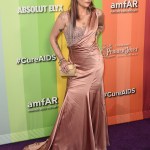 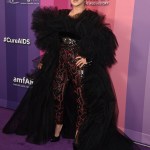 Paris Jackson looked rocker chic at the amFAR Gala in Los Angeles on Oct. 10 with her beau Gabriel Glenn, as the couple struck some fierce poses on the purple carpet.

It was date night for Paris Jackson, 21, and her boyfriend Gabriel Glenn, 20 at the amFAR Gala. The singer and her man walked the purple carpet together, with Paris showing off her stunning dress. Paris wore a satin, blush colored gown by Alberta Ferretti Limited Edition that featured jewel embellishment on the left side of her chest. The ensemble was perfect for showing off her numerous tattoos along her arms and chest and she accessorized the look with simple gold jewelry and a clutch.

Paris and Gabriel looked like quintessential rocker couple — and for good reason! The duo formed their band, The Soundflowers, in 2018, making their first musical appearance at Canyon Sessions in June 2018. Since then,  their professional and personal relationship has been going strong. After forming their band, the pair got a lot closer, as rumors swirled the two were romantically linked in Aug. 2018. While both denied the rumors, at first, they started to go public with their romantic relationship by January 2019, putting on a lot of PDA while out and about. Just like in the photos from the amFAR Gala, Gabriel has been a real shoulder for Paris to lean on.

He’s been a huge support system for Paris, who has been in a back-and-forth feud with rapper, 50 Cent, and even reliving sexual misconduct allegations levied at her late father, Michael Jackson, who passed away in 2009. Through each ordeal, Gabriel has been showering his GF with lots of love. On April 3, Gabriel left the sweetest birthday message to Paris, writing in part, “what a crazy beautiful strange trip around the sun it has been. My sun rises and sets with you. You’re my moon, my everything. It has been the greatest honor and pleasure to share my heart, soul, dreams & bed with you. Thank you for showing me what unconditional love really is, you make me a better man & musician than I could ever hope to be. You put the words in my head, the melodies in my heart. One birthday together down, a lifetime to go.”

Clearly, those who rock together stay together. And their relationship was on full display at the amFAR Gala. Here’s to more pics of these two rocking their looks and love on more red carpets!