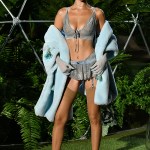 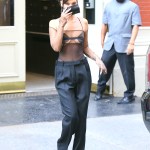 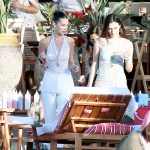 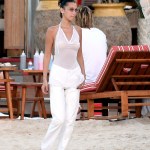 When you’re a model, you do your birthday in style! Bella Hadid celebrated turning 23 at a huge party in NYC surrounded by family and friends — and The Weeknd.

It’s safe to say that Bella Hadid had the best birthday ever. The supermodel celebrated turning 23 in style, partying the night away with her friends and family at the swanky Le Chalet, the cocktail lounge located on the lower level at L’Avenue at Saks’ in New York City. Only one of the biggest names in fashion would have their birthday party at Saks Fifth Avenue. And it was quite the bash. Bella rolled up to the club looking absolutely gorgeous in the cutest outfit: a sheer, dangerously low-cut top that showed her midriff, black pants, and sparkly heels. She accessorized with a leopard print purse and major jewelry. That’s a crystal Christian Dior choker around her neck! She also rocked a matching butterfly ring and earrings from Jacob & Co. You can see a pic of Bella arriving to her birthday party in her cute outfit below.

The cocktail lounge was filled up with gold and silver balloons as Bella and her guests sipped cocktails and knocked back magnum bottles of Grey Goose vodka. So much fun! The guest list for Bella’s big two-three was totally star studded. Her close-knit family was obviously there — mom Yolanda Hadid, sister Gigi Hadid, brother Anwar Hadid, and his girlfriend, Dua Lipa. Her pack of fellow models and celebs were in attendance, too, including Joan Smalls, Kaia Gerber, Stella Maxwell, Lily Rose Depp, Jesse Jo Stark, Justine Skye and Diana Silvers, who snapped tons of pics with disposable cameras. There’s one guest who stood out among the rest, though. Bella’s ex-boyfriend, The Weeknd, came to the party! Who would’ve thought that would ever happen?

Well, after their first breakup, Bella and Abel did stay friendly. Remember when he had to see her and Gigi strut the runway at the Victoria’s Secret Fashion Show when he was the performer. The sisters were seen giving him hugs, and everyone looked happy. Though Bella and The Weeknd have broken up again, they’re clearly on good terms. In fact, the exes were spotted taking tequila shots at the bar after everyone sang Bella “Happy Birthday” and ate cake. The Weeknd was also seen taking pics of Bella and one of her friends, celebrity manicurist Mei Kawajiri… and feeding Bella macaroons from her 11-tier cookie tower. Okay, is something going on here?

If you want to celebrate Bella’s 23rd birthday with us, check out her 23 sexiest runway looks in honor of her special day. She’s SO fabulous!