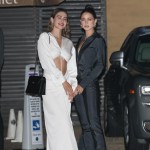 Harry Hamlin revealed his thoughts on his two daughters’ ‘journey,’ from their dating lives to ‘minefields’ they’ve had to overcome in a new interview.

Harry Hamlin, 67, has many reasons to be proud of his daughters Delilah Belle, 21, and Amelia Gray, 18, whom he shares with The Real Housewives of Beverly Hills star Lisa Rinna, 56! Reason No. 1 — the Mad Men star’s eldest daughter, Delilah, has found happiness with Love Island star Eyal Booker, 24, after first sparking rumors of a romance thanks to their PDA at Coachella in April 2019. Harry admitted he’s “very much” a fan of his daughter’s new beau, and even added that the British heartthrob is a “great guy” while speaking to HollywoodLife in a group interview at the The Creative Coalition’s Television Humanitarian Awards Gala on Sept. 21!

Harry just has one requirement for men that wish to date his two daughters. “As long as the boys they’re going out with are good guys, I’m fine with it, you know?” Harry told us during the group interview at Ocean Prime in Beverly Hills. However, Harry revealed “that’s not always the case” — there are rotten apples out there, which Delilah touched on in her confessional essay about going to rehab twice for “terrible depression,” after seeking help in Feb. 2018. Before treatment, however, the model revealed in her Instagram posts that she was “trapped in a severely unhealthy relationship” that pushed her “over the edge.”

With Delilah now thriving post-rehab and in a healthy new relationship, Harry added, “But right now, they [his daughters] all seem to be good. So I’m in a good mood about [it] all.” And does Harry put these “good guys” through tests, per standard dad protocol? “Well, the test of time is really what tells me whether they’re good or not,” the actor admitted. “But you know, they’re learning. My kids are learning, you know.”

Dating lives aside, Harry couldn’t stop gushing about how he’s “really proud” of his daughters in this current social landscape! “Kids today have these amazing minefields that they have to navigate through, you know, social media and now this Juul thing is out there and everybody’s talking about the whole vaping thing that’s going on,” Harry told HollywoodLife and InTouch Weekly. “And not to mention, you know, young girls coming into their own, you know, as sexual beings and as emotional beings. So then my deals [are with the] multiple barriers and my kids have managed to get through them.”

“So, my kids have been able to face those head on and have come out and really helped a lot of people by explaining how they’ve gotten through their journey and how they’ve dealt with those minefields,” Harry continued. Indeed, Delilah helped many fans feel less alone after opening up about her battle with depression in 2018. Harry also shares an older son, Dimitri, 39, with former Bond girl Ursula Andress, 83.