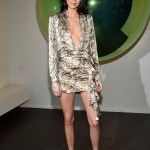 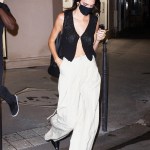 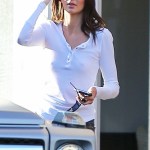 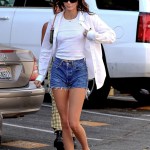 Kendall Jenner went super casual when heading out to lunch in Beverly Hills, as she didn’t wear anything underneath her thin tight white t-shirt with Daisy Dukes.

Kendall Jenner is in sunny L.A. instead of attending Paris Fashion Week like her mom Kris, 63. The 23-year-old model took advantage of the warm weather on Sept. 25  in a summery outfit while heading to lunch in at the South Beverly Grill in Beverly Hills, even though it’s now officially autumn. Kendall continued to show off that she hates to be constricted by bras, as she went without one and as a result her nipples could be seen though the thin fabric of tight white t-shirt. She didn’t seem to care though, looking at ease as the paparazzi took plenty of pics.

Kendall paired the tight white tee with a pair of cutoff Daisy Dukes that showed off her incredible long model legs. She added a loose white blouse that covered up her arms, but wore it open and unbuttoned so that her chest could be seen. As for footwear, Kenny went with comfort in brown Birkenstock style sandals. She added a delicate necklace, small handbag and dark sunglasses as her accessories.

The model is treating herself to some time off as she walked in both London and Milan fashion weeks. She has scaled back dramatically on her runway work, but returned for such prestige brands as Burberry and Versace. In London she even went blonde, debuting the look at Burberry’s show. But it wasn’t meant to be, as Kendall’s locks are now back to their natural dark hue. For lunch today, she wore her hair in messy waves just below her shoulders.

Kendall made it back to L.A. from Milan to attend the Prime Time Emmys for her first time on Sept. 22. She presented an award with sister Kim Kardashian, 38, but it didn’t go over as planned. While both ladies looked amazing, they gave an earnest delivery with their intro to the award for Outstanding Reality-Competition Program. “Our family knows firsthand how truly compelling television comes from real people just being themselves,” Kim said, then Kendall added, “Telling their stories unfiltered and unscripted,” which elicited laughs from the audience. It turned out they were supposed to deliver the line in a joking tone but no one told them! Sister Kylie Jenner, 21, was supposed to be up there with Kim and Kendall, but ended up hospitalized with a flu-like illness.