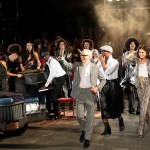 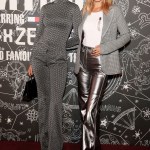 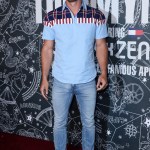 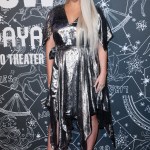 Bella Hadid, Winnie Harlow and Meghan Trainor were also on hand to celebrate the highly-anticipated TommyXZendaya collection at NYFW!

The Tommy Hilfiger fashion show is always a lavish event and this year, the highly-anticipated event was at the famed Apollo Theater in New York City. Tommy and actress, Zendaya, 23, showed off their Fall 2019 TommyXZendaya collection on September 8. The TommyxZendaya collaboration marks the second and final collection from their partnership and it was nothing short of perfection.

Zendaya slayed in a super sexy snakeskin suit for the milestone event, consisting of a print blazer and matching bootcut pants. Her pointy pumps also featured the same beige-and-brown print, creating a monochrome effect. The actress sported a white crop top beneath the blazer and accessorized with silver earrings and an open circle-shape necklace.

The guest list for the event was star-studded, with appearances by fellow Tommy girl Gigi Hadid, 24 — who didn’t walk in this season’s show — and her sister Bella Hadid, 22. The sisters both wore ’70s inspired looks from the TommyXZendaya collection, opting to twin in silver. Bella looked fab in silver pants and a fall-ready gray blazer, while Gigi rocked a monochrome turtleneck and flare pant outfit with red pumps and an oversized hat. Gigi’s new boyfriend, Tyler Cameron, 26, was also on-hand in addition to models Winnie Harlow, Candace Swanepoel, and Ashley Graham, all of whom walked the runway. Meanwhile, Garcelle Beauvais, Irina Shayk, and Jameela Jamil slayed in the front row.

The TOMMYNOW “see-now, buy-now” runway was full of on-trend looks and was the first TOMMYNOW show to return to New York City since 2016. “It feels full circle to bring our TOMMYNOW ‘See Now, Buy Now’ runway event back to New York City after a worldwide tour,” Tommy Hilfiger said. “We are proud to put on a show that is always different to what our industry has seen before and the important dialogue it supports. I was immediately excited by Zendaya’s suggestion to bring TOMMYNOW to Harlem as we continue to celebrate the diversity and inclusivity at the heart of our collaboration and brand DNA.” Past TOMMYNOW shows have taken place in London, Paris, Los Angeles and Tokyo.

The show was spectacular and full of gorgeous looks, which we got to see a sneak peek of the week before thanks to Zendaya. The actress headed to several  NYFW events rocking looks from her must-have collection. She arrived at the launch of Lancôme’s new fragrance, Idôle, at Macy’s Herald Square in NYC on Sept. 4, where she wore the polka dot tie neck dress with a slit on the side, showing off her long, lean legs. The midi dress featured long sheer sleeves with a long scarf ribbon tied around her neck.

Meanwhile, she wore another fabulous look from her collection at The Daily Front Row Fashion Media Awards on Sept. 5, where she sported a full burgundy velvet suit featuring a fitted blazer and matching straight-leg trousers. She opted for retro accessories including a velvet newsboy hat and a sheer polka dot scarf which was tied around her neck.