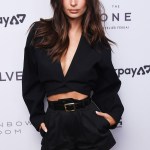 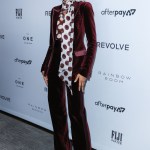 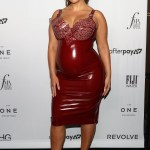 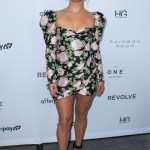 The sexy looks were front and center at the star-studded Daily Front Row Awards, which took place during New York Fashion Week!

Emily Ratajkowski slayed at Daily Front Row‘s seventh annual Fashion Media Awards at New York City’s Rockefeller Center on Thursday, September 5! The 28-year-old was being honored at the event, which celebrates outstanding achievements in the fashion industry. Emily snagged the coveted Fashion Entrepreneur of the Year for her popular swimsuit line Inamorata, which she often models on her own Instagram account (that, by the way, boasts almost 24 million followers).

Emily rocked a cleavage-baring plunging black crop top with long sleeves, and matching black short-shorts with a black belt. Her toned legs looked incredible in the outfit, and her perfect blow out and makeup were done to perfection. In addition to Emily, super model Kate Moss, 45, was also being honored — earning this years’ Style Icon award. The award was well deserved, as Kate has been an influencer in the fashion space for over over two decades, beginning her career in the 90s with Calvin Klein and working with Chanel, Dolce & Gabbana and Gucci over the years. The always-sexy Kate model rocked a sheer black dress with a belt and sexy high-heeled sandals for the show.

Zendaya, who was just named one of Vanity Fair‘s Best Dressed, was chosen as this years’ FMAs Fashion Force at the event. The 23-year-old actress has been a trailblazer in the fashion space over the years, revered for her eccentric sense of style and also collaborating with legendary designer Tommy Hilfiger on a capsule collection. She wore a sumptuous burgundy velvet suit for the occasion, paired with a matching poorboy hat and a white-and-burgundy polka dot scarf. The print seems to be a favorite of Zendaya’s lately, as she also rocked a black-and-white polka dot dress a few days ago for the launch of her fragrance!

Other attendees included model Delilah Hamlin, who sported a super sexy pink blazer sans a shirt or bra underneath and the very pregnant Ashley Graham! Ashley looked radiant as she showed off her baby bump in a skintight burgundy lasercut pencil dress by designer Vex.