Derek Hough is one proud big brother. The pro dancer, 34, gushed over his sister, Julianne Hough‘s “courage” to open up about her personal self-discovery in a new interview with Women’s Health magazine. In the candid conversation, Julianne, 31, reveals that she’s “not straight,” and how her husband reacted to her admission, along with her journey of a personal evolution.

“Proud of you @juleshough. A beautiful article about shedding the protective walls that can imprison us,” Derek wrote in a post on Instagram, August 1, alongside his sister’s fully nude magazine cover. “A stunning artistic representation capturing the courage of realizing your true essence and strength. Unleashing your freedom,” he continued. Julianne responded with, “Love you so much D for always being my greatest supporter!”, adding three red heart emojis.

Derek also took to his Instagram stories to inform his followers of Julianne’s development of “Kinrgy” — aka the SoulCycle of dance, which encourages others to move freely and feel transformed by movement like she has. The workouts for her dance method are 45 minutes and include no mirrors. “So some very exciting stuff, my sister Julianne has been working on a program for quite some time now, and she’s finally released it… It’s called Kinrgy,” Derek said in one of a series of videos. 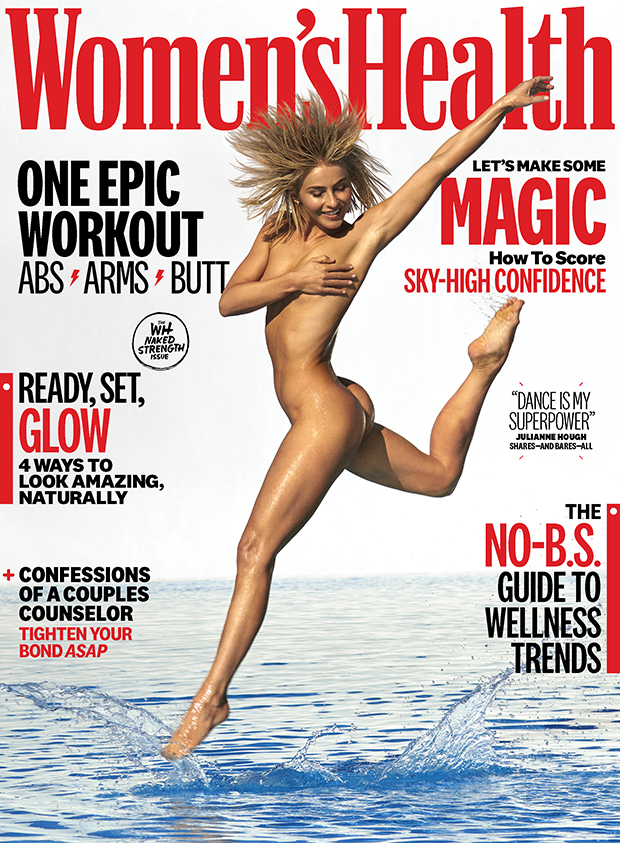 “I’ve seen first hand her develop this process and I can tell you it’s incredible, it’s amazing, and it’s worth being involved in. It’s really special. I have no doubt she’s going to change lives through this beautiful program,” he continued, directing viewers to swipe up to go to the website and sign up. Derek ended his videos by complimenting his sister’s nude magazine cover. “And, I have to say, her cover of her magazine is tasteful and beautiful. I’m proud of you Julianne,” he said.

In what is arguably Julianne’s most revealing interview to date, the actress explains in detail about her sexuality. She starts off by saying she told her husband, Brooks Laich, 36, that she’s “not straight,” four months into their marriage. The two wed in July 2017.

Julianne went on to admit that she was nervous to share the intimate detail with her then new husband. “I was connecting to the woman inside that doesn’t need anything, versus the little girl that looked to him to protect me,” she explained in the profile. “I was like, ‘Is he going to love this version of me?’ But the more I dropped into my most authentic self, the more attracted he was to me.”