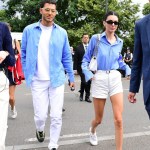 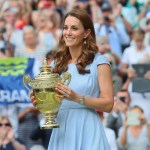 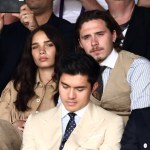 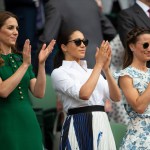 Celebrities packed the seats at the exciting Wimbledon final in London on July 14 to watch the intense match between champion tennis players Roger Federer, 37, who is up for his ninth Wimbledon title, and Novak Djokovic, 32. The enthusiasm was apparent at the All England Lawn Tennis & Croquet Club, where the match took place, as familiar faces, including Kate Middleton, Prince William, Brooklyn Beckham, Kate Beckinsale, and more cheered on the skilled athletes and held onto the edge of their seats with every score-defining moment.

Kate, 37, and William, 37, sat in the Wimbledon Royal Box, of course, during the tournament, and they were all smiles throughout. The Duchess of Cambridge looked gorgeous in a light blue short-sleeved dress while the Duke of Cambridge matched her outfit in his own light gray suit with a light blue shirt and tie. They both wore sunglasses to keep the sun out of their eyes as they waved to onlookers and cheered on the players during the event.

Kendall Jenner, 23, also showed up Wimbledon with her hunky male friend Fai Khadra. They matched in blue and white ensembles as they watched intensely from their seats while actor Tom Hiddleston, 38, stopped and posed for pictures in a flattering suit before taking his seat.

Brooklyn, 20, and his girlfriend, Hana Cross, 22, were spotted going into the championships in eye-catching retro outfits, including Brooklyn’s tan jacket and vest, which he wore with a button-down shirt and tie, and matching tan pants, and it caused both positive and negative reactions on Twitter. Hana’s tan jacket with fringe, which she wore over a white romper, also got attention. “Why is Brooklyn Beckham dressed as a 1920s archaeologist? Posh, have a word love,” one tweet read. “I’ve just figured it out @brooklynbeckham is on a bet to impersonate Charlie Chaplin,” another read.

Other celebs that were seen at the Wimbledon final include actress Kate Beckinsale, 45, who looked gorgeous in a dainty white lace ensemble, singer Leona Lewis, 34, who wore a summery blue and white striped ensemble, actor Benedict Cumberbatch, 42, and his theatre director wife Sophie Hunter, 41, who were both sitting near Tom, and model Poppy Delevingne, 33, who wore a flowing emerald green dress.