Beyonce, 37, absolutely stole the show at the LA premiere of Disney’s live-action version of The Lion King on Tuesday July 9, and we are obsessed with her entire look from head-to-toe. In true Beyonce fashion, the songstress arrived looking super glamorous and her entire outfit was perfect for the occasion. Dressed in a custom-made Alexander McQueen tuxedo dress, Beyonce accessorized her look with crystal jewelry, crystal embroidered pin heel sandals, and a crystal chandelier embroidered box clutch with a jeweled handle. Aside from Beyonce’s outfit, her glam was also on point, too. Bey’s makeup was done by her longtime makeup artist Sir John, who always makes sure Beyonce looks absolutely flawless. Meanwhile, her hair looked just as gorgeous and was done by none other than Neal Farinah, who has been styling the singer’s hair for over a decade.

Since the news broke that Beyonce would be playing the role of Nala in the remake of the 1994 film, the star has been looking better than ever while promoting the movie. Not only does Beyonce play the iconic character of Nala in the film, she is also featured in a duet with Donald Glover, 35, to the hit song, “Can You Feel The Love Tonight.”

Aside from this gorgeous premiere look, just last week, Beyonce looked stunning in a cast photo for the film, in Los Angeles on July 8, when she opted to wear a skintight, off-the-shoulder black dress with long-sleeves and a low-cut neckline. The neckline showed off ample cleavage, while the rest of the body hugging dress highlighted her curvaceous frame perfectly. She topped her look off with a super high curly ponytail which was pushed to one side, and added dazzling Vhernier Verso 18K rose gold earrings that are worth a whopping $10,650. 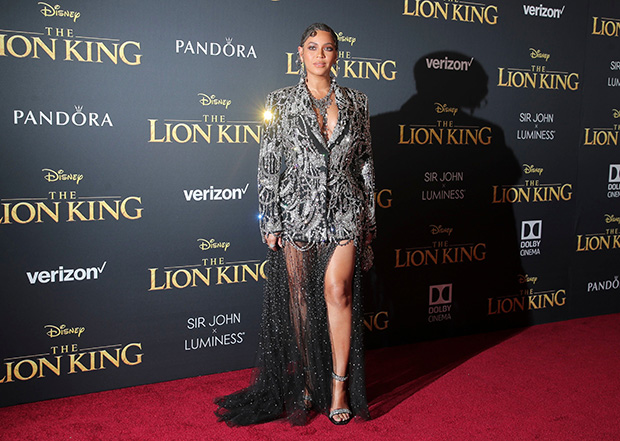 There were so many other fabulous celebs in attendance, including the entire cast, at the premiere of the film, which you can see when you click through the gallery above. Plus, the movie officially hits theaters on July 19.