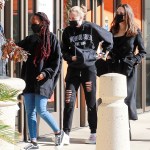 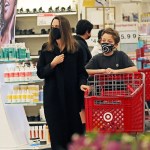 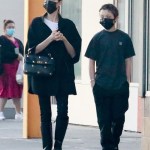 Angelina Jolie sure goes on the move fast! Just one day ago she was out in Los Angeles with twins Knox and Vivienne doing some shopping and on July 7 she emerged from a Parisian hotel looking like a goddess. The 44-year-old actress looked every inch a movie star in a light brown dress that featured a long skirt and long sleeves. She accessorized with a brown belt that showed off her slim waistline and wore tan heels. Angelina rocked full makeup, including a gorgeous red lip.

The Oscar winner wore her hair pulled back in a tight bun, had on large brown sunglasses and her nails were perfectly manicured and painted red to match her lipstick. She was accompanied out of her hotel in Paris alongside actress Jaqueline Bissett, 74, who is Angie’s god mother as she was close friends with her late mom Marcheline.

It’s not clear how many of Angie’s six kids made the trip across the pond with her, but 10-year-old daughter Vivienne made the trek. She was seen smiling next to a bodyguard while waiting for her mom outside the hotel. She wore her usual super casual look of loose blue jeans and a t-shirt. She showed no sign of jet lag having made the long flight from L.A. to France.

While Vivi was there with her mom, there were no sightings of her brothers Maddox, 17, who is getting ready to head off to college, Pax, 15, and twin Knox, 10, and sisters Zahara, 14, and Shiloh, 13. Vivienne seems to get the most one on one time with her mom and she’s also the youngest child, as her teenage siblings are growing up and finding their own activities. Mother and daughter have been spotted across LA all summer on cute shopping trips and other outings.