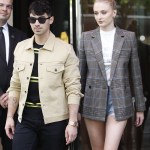 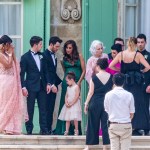 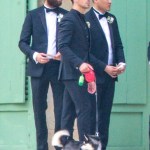 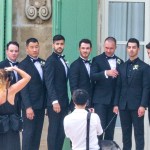 It’s almost time to get the party started! Ahead of their second wedding, Sophie Turner and Joe Jonas greeted guests with hugs and wine as they arrived at the Chateau de Tourreau in southeastern France.

All the pieces are coming together for Joe Jonas, 29, and Sophie Turner’s elegant wedding. Sophie, 23, and her rockstar husband were spotted outside of what appears to be their formal wedding venue, the Château de Tourreau, in Sarrians, France. The couple warmly hugged guests and the staff, while Joe gladly accepted a glass of wine. Considering that the two are in Provence, a region in France known for its rolling vineyards, how could Joe not take a glass of wine? Expect a lot of wine to be drunk in the lead up to their second wedding…and at the reception…and afterward.

Oddly enough, Joe and Sophie’s apparent choice in wedding venues ties them to The Real Housewives of Beverly Hills. Château de Tourreau is a restored 18th century castle available for rent for up to $4,774 a night, according to Elle. However, whenever you slap the word “wedding” on anything, including venues, it jacks the price up through the roof. Oh, and Château de Tourreau has plenty of roofs. It also has nine rooms, an infinity pool, a tennis court, a volleyball court, and its own winery. The whole place is gorgeous, which is probably why the RHOBH cast decided to vacation there this season. “Like Downton Abbey, but in France,” Lisa Rinna said, during a June episode, per Bravo. “Downton France Abbey!”

Joe and Sophie weren’t hanging out with any of the Housewives ahead of their wedding. Instead, Joe was spotted hanging out with Nick Jonas, his wife Priyanka Chopra, and…Wilmer Valderrama. Yes, two of Demi Lovato’s exes – she and Joe had an on-off relationship between 2008-10, while she and Wilmer were together from 2010 to 2016 – were hanging out before one of them got married for the second time. It seems Joe is has made peace with his past, as before this hangout sesh with Wilmer, he watched his ex, Gigi Hadid, 23, walk down the runway at the Berluti Menswear Fashion Show on June 21.

Will Gigi or Wilmer show up for Joe and Sophie’s “official” wedding? The couple legally tied the knot on May 1 in Las Vegas. Nick Jonas and Kevin Jonas, 31, were on hand for groomsmen for this ceremony, and Diplo filmed the whole thing for his Instagram stories. Dan + Shay and Khalid were also on the guest list for this Sin City ceremony.