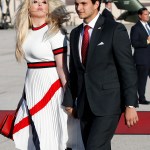 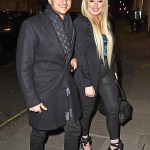 Is a White House wedding in the future for Tiffany Trump and Michael Boulos? The couple were reportedly looking at engagement rings at a pricy jeweler in London!

Tiffany Trump, 25, was spotted browsing a high-end jewelry store in London during the family’ state trip to the UK, and she apparently wasn’t looking for just any accessory. Tiffany was with her boyfriend, Michael Boulos, and they were paying particular attention to the diamond engagement rings, according to Maan Chakhchir, the manager at Samer Halimeh New York. “Michael Boulos and Tiffany Trump visited our Knightsbridge boutique for around 45 minutes and from meeting them I can say that they are a really lovely couple, very down-to-earth and clearly very happy together. They seem very much in love,” he told the Evening Standard. While the couple didn’t leave with an engagement ring, President Donald Trump‘s daughter did pick up something special: a £500,000 ($634,000) diamond “friendship” bracelet. Diamonds are a girl’s best friend, after all.

Tiffany and Michael, 25, have only dated for 10 months, but an engagement wouldn’t be out of the question yet; they’ve been hot and heavy since the beginning. Michael, a London graduate student and the heir to a multibillion-dollar conglomerate in Nigeria, joined Tiffany and the rest of the First Family during their state trip, and previously spent Thanksgiving with them at Mar-A-Lago in Florida last November. While in London, he and Tiffany attended official events, like a state dinner at Buckingham Palace, but they managed to get some alone time in the city once Air Force One headed back to the United States. Along with their little shopping trip, the couple galavanted around town and looked just utterly in love.

And before that, they were living it up in Cannes and Monaco during the Cannes Film Festival. There wasn’t a party that they didn’t hit up while in town. Yachting was on the docket, too. And, who knows — maybe a White House wedding in the future!