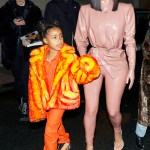 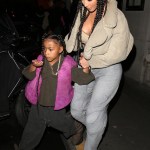 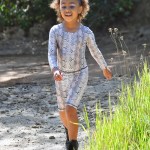 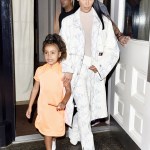 Like father like daughter? Apparently, Kanye West’s daughter North wants to be a rapper just like her famous dad! The 6-year-old excitedly told her mom about her future plans in an adorable new video.

Let’s hope Kanye West’s hit-making skills were passed onto his kids. His eldest child, North West, apparently wants to be a rapper just like her famous father! The six-year-old daughter of Kanye and Kim Kardashian, 38, revealed the all her future dreams to her family in a new Instagram video. “[I want to be] a dancer,” little North could be heard saying. “I want to be a rapper and I want to be a singer!”she exclaimed. The confession was made to mom Kim as well as her great grandmother, Mary Jo, who were incredibly supportive of North’s dreams. Is it only a matter of time before North is scooping up Grammys herself?

While this is the first time North has revealed her big Hollywood dreams, we already knew she was set for superstardom. I mean, just look at the music video she created this past past May! North and her mom made a homemade music video dancing along to Lil Nas X’s “Old Town Road” and it was immediately apparent that this little lady was made for the limelight. Between her flawless dance moves and the sass she tossed at the camera — she’s already got all the makings of a pop star!

It was so sweet to see just how supportive North’s mom and gram were of her big time dreams. North’s confession might have taken center stage in the clip, but the video was actually supposed to shed light on Kim’s new body makeup line. The Keeping Up With The Kardashians star was seen showing MJ how to apply the new product to her own skin. “My grandma MJ asked me about my Body Makeup and wanted me to come over to help cover her veins. North & I went straight to her house & showed her exactly how to use it & I love how happy she is with the results!” Kim explained in one part of her caption. Kim’s full body cosmetics collection launches on June 21. Watch the promotional video where you can hear all about North’s future dreams RIGHT HERE!