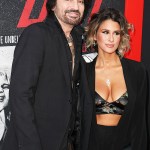 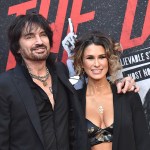 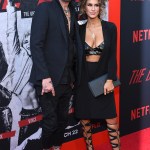 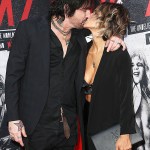 If your wife had a ‘natural’ body like Brittany Furlan, wouldn’t you want to brag about it like Tommy Lee did? The Mötley Crüe couldn’t help but go wild over a picture of Brittany in a purple bikini that was barely there.

“She [is] gonna kill me for posting this, but look at this 100% natural body,” Tommy Lee, 56, captioned a June 15 Instagram picture of his wife, Brittany Furlan, 32. In the photo, taken while the lovebirds were on vacation in Mexico, Brittany is rocking a very sexy string-bikini that ensures that she wouldn’t have too many tan lines. With such an all “natural” figure — which does look amazing — no wonder Tommy included that sweet but slightly crude bit at the end of the message. The choice of tongue emoji hinted that the Mötley Crüe drummer wanted to cover KISS’s 1983 song and “Lick It Up.”

Cheesy hair metal references and innuendo aside, Brittany did seem slightly upset that her husband shared the photo but not because he revealed her barely-there outfit. “OMG my face,” Brittany responded to the post, according to Fox News. Perhaps the reason behind her “shocked” face is why she would “kill” Tommy for sharing that photo? While the cause of Brittany’s expression remains a mystery, it’s clear that many of Tommy’s fans agreed with his appreciation of his wife’s “body,” including Courtney Love, 54. “So cute!!” the Hole frontwoman wrote in the comments section.

This purple bikini photo comes about a month after Tommy posted a snap of his wife in a hot little black number. “Dayum!!! My wife is [bomb emoji],” Tommy captioned a shot of Brittany in a black, pushup bra and tiny thong underneath a fishnet coverup. If this trend continues, expect Tommy Lee to spend this summer sharing many more pictures of Brittany in a variety of swimsuits. Have we found an early contender for Queen of the Summer?

It appears that Tommy Lee and Brittany are enjoying their honeymoon period. The two tied the knot on Valentine’s Day this year, and Tommy let everyone know in his typical way. “Holy sh-balls!!!! We did it!!!! Mr. & Mrs. Lee,” he wrote on social media. Leading up to their special day, Brittany said that she couldn’t believe that she “went from the most depressed, lonely girl, thinking I would die alone with my dogs, to getting married… wow… life is a trip.” Judging by all these bikini photos, it’s more like Brittany and Tommy’s life together is a vacation.