With the 2018 demise of John Cena and Nikki Bella as the WWE’s reigning sweethearts following their breakup, the organization has a new power couple with Seth Rollins and Becky Lynch The gorgeous pair made their red carpet debut at the MTV Movie and TV Awards in Los Angeles on June 15 looking absolutely crazy about each other and they opened up to us about their romance. The day prior, Seth tweeted out “When I found you, I found me” and he says that it was definitely a message to Becky, telling us  “Oh yeah! People can look into it any way they want,” while looking at Becky with a big smile. The 32-year-old red-head said that they are looking forward to where their romance takes them and that “I think we are stronger together anyways.”

Seth confirmed on May 13 that he and Becky are involved in a hot romance by sharing a black and white Instagram photo of them kissing following his defeat of Brock Lesnar at WrestleMania 35 with the caption “I guess I’m allowed to post this now…. @beckylynchwwe?” Becky and Seth have been together for several months but have been super coy about it. Rumors sparked that there was something going on between the two when they sat together at the WWE Hall of Fame inductions on April 6 and they had been spotted together a few other times as well. But it was the Instagram pic that made things official.

Even on the MTV red carpet, they were still a little shy about discussing their relationship as you can tell by their brief but adoring responses. In addition to her handsome 33-year-old boyfriend, Becky brought along another accessory to the MTV Movie and TV Awards by carrying her RAW title belt proudly over her shoulder, even though she wasn’t there to defend anything. 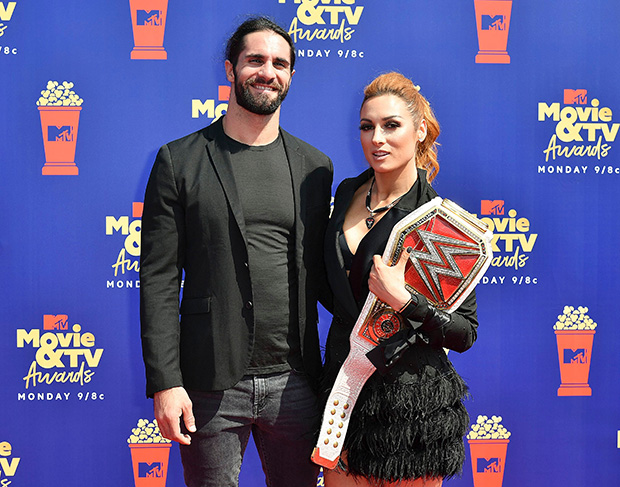 The stunning Irishwoman looked super sexy in a black long sleeved mini-dress with a short feathered skirt. Seth looked hunky in a pair of dark jeans, a tight black t-shirt showing his buff torso and a black jacket. It’s so great that these two finally taking their romance public by walking their first red carpet.