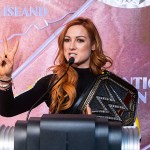 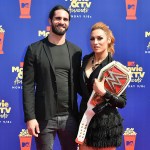 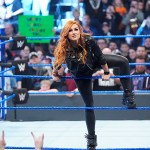 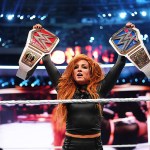 Before the WWE’s double-champ turns Money In The Bank into the ‘Becky Lynch Show,’ she EXCLUSIVELY tells us the advice ‘Stone Cold’ Steve Austin gave her, and issues a challenge to her boyfriend, Seth Rollins!

“The Man” is currently sitting on top of the world in the WWE, but for how long? Becky Lynch won both the Raw and SmackDown Women’s championships when she defeated Charlotte Flair and Ronda Rousey in the main event of WrestleMania 35, the first time a women’s match closed out “the showcase of the immortals.” Yet, as the saying goes, “mo’ money, mo’ problems.” Becky will pull double-duty at the WWE’s next main event, Money In The Bank. On May 19, she’ll defend the Raw Women’s Championship in a match with Lacey Evans, while the SmackDown Women’s title will be on the line when “The Man” faces her friend-turned-enemy, Charlotte Flair.

While a lesser WWE Superstar would be quaking in his or her boots, “The Man” isn’t shying away from these fights. Ahead of what will be a wild night for the WWE Universe, Becky EXCLUSIVELY tells HollywoodLife.com how she plans to remain “Becky Two Belts” after MITB, the next movie role she’d like to tackle after her breakout acting performance in The Marine 6, and why her newly-revealed boyfriend, Seth Rollins, better keep a tight grip on his Universal championship.

HollywoodLife.com: You have two huge matches at Money In The Bank. Plus, the person who wins Money In The Bank could cash in their “anytime, anywhere” championship contract after winning it that night. How are you even fathoming a possible three matches at the show? You have all the targets on your back – how will you come out of that show still as “Becky Two Belts”?

Becky Lynch: So, I stay ready. That is nothing new for me. It’s about being prepared. I have working for this moment for years and years, so let’s not forget that. The way I got into WrestleMania was by competing in two matches in one night [Ed. Note: she lost to Asuka in a SmackDown Women’s Championship match at the Royal Rumble, before going on to replace Lana in the women’s Rumble match, which Becky won.]

I may have lost my first match but I came back and won the whole women’s Royal Rumble. So, it is nothing that is new to me. I always just stay prepared.

HL: You are representing Smackdown Live, along with Monday Night Raw but in a few months, Smackdown Live is heading to FOX. What would you like to see the show to become when it moves over to FOX?

In a great way, your enormous rise has been compared to “Stone Cold” Steve Austin’s rise in the WWE. Have you been able to have any discussions with him since all this great stuff has been happening for you and if so, what advice have you gained from him?

Yeah, I have been able to talk to him. We actually live quite close to each other. I know you work for HollywoodLife so you can call me “LA Becks!” Yeah, I have gotten to talk to him, and most of his advice has been once you are on the top, everyone is going to have an opinion, everybody is going to have advice, and everyone is going to try to throw in their two cents. So it’s just a matter of drowning out all the other voices except your own and continuing to trust yourself.

We loved you in Marine 6. When it comes to more films and TV opportunities, what is something you’d like to dive in next on that front? Marvel film?

Really anything. I would like to have the ability to perform. It’s just what I do and what I am meant to do. As cheesy as that might sound, being able to connect and emote is what I do. I think though I would make a pretty damn good X-Men. Siren hasn’t been cast has she?

Often celebrities or other sports stars come into the WWE and try it out to varying success. Is there anyone in entertainment or other sports you’d like to see come and give WWE a chance?

I am not really bothered by that. The only thing I really care about in this business is passion, drive and hard work, right? So if you want to come in and think you can make a name for yourself and think that this is easy and think it can happen for you? I have no time for that. Anyone that wants to put in the work and wants to pay their dues? Then absolutely, by all means – come on in.

On that note, you have been critical of Ronda Rousey’s time in the WWE. Why do you feel that way?

My problem with Ronda Rousey was that I said it. She was not obsessed with this. You don’t love this? And as soon as you’re tested, you are going to be out! And as soon as she was tested, she was out!

Does she see the woman’s division main-eventing other big shows like SummerSlam and Survivor Series in the near future?

Oh, absolutely. The sky is the limit, right? We keep fighting through glass ceilings. We keep burning the house down, and we have built a whole new freaking castle. I think it is about consistency and it is about maintaining everything we got. Make sure people stay invested and making sure that we have these incredible matches. We consistently steal the show, and I want everyone to do that. I want everyone to want to main event of every show!

Do you want to be “Becky 3 Belts?” Or “Becky All Belts?” Would you like to wrestle some of the guys and win their titles?