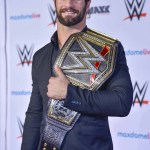 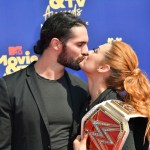 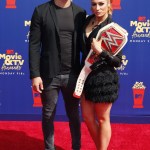 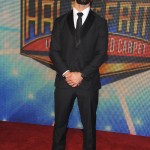 ‘The Man’ has a brand new man in her life, and it’s Seth Rollins! After Becky Lynch let it slip that she was dating her fellow WWE Superstar, Seth made their romance official — with a kiss!

“I guess I’m allowed to post this now….” Seth Rollins, 32, posted to Instagram on May 13, uploading a black-and-white picture of him planting a giant kiss on the lips of Becky Lynch, 32. The post comes after Becky hinted that she just might be dating her fellow WWE Superstar. Well, all speculation has been body-slammed, as Seth’s picture confirmed it! Move over “Macho Man” Randy Savage and Elizabeth. Make room, Triple H and Stephanie McMahon. Becky and Seth and the next big power couple within the WWE.

Becky let the cat out of the bag during a convoluted interaction with Beth Phoenix and retired WWE Superstar Edge (real name Adam Copeland) on Twitter days before. It all began when “Becky Two Belts,” as she’s currently both the Raw and SmackDown Women’s champ, shared a picture of her raising her two championship titles. “Don’t get too close to that title, [Beth],” she tweeted. “No worries @BeckyLynchWWE …I’m just glad that we are friends and not steaming over a silly little detail like being tied for the number of title reigns. Cheers!” Beth responded. [Beth and Becky are both 4x-champions, fyi.]

Becky, who is notoriously vicious on Twitter, wrote, “Yeah, we’re neck and neck alright,” while sharing a picture of Beth’s husband, Edge (who retired due to cervical spinal stenosis, a bone disease affecting the neck.) Yikes. Edge tried to clap back at her by saying she was “Edge lite” early on in her career, but Becky replied by quoting the lyrics to his theme song. (“Yeah, no, you’re right, Edgester. They want me to be nicer on social and I forgot. On this day, I see clearly. Everything has come to life. Pals?”) “Wait, wait. Are we involving our men now,” Beth asked, which prompted Becky to spill the tea. “I’ll ask him. [Seth]?” With one tweet, Becky set the WWE Universe buzzing over this new romance.

I guess I’m allowed to post this now…. @beckylynchwwe ? https://t.co/6vRaPP7Sgq

Seth’s romantic life has been the spotlight in the past. He was previously engaged to Leighla Schultz, but that relationship exploded in February 2015 when naked pictures of then-WWE Development star Zahra Schrieber were posted to his Instagram, Facebook and Twitter pages. Leighla shared a nude photo of Seth on her Twitter account, indicating that he had cheated on her with Zahra. Zahra wouldn’t be with the WWE for long after that, as she was fired in September 205 after fans uncovered Nazi-inspired pictures on her Instagram account. The two broke up in 2016.