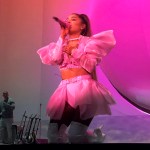 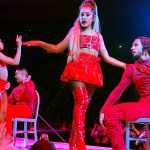 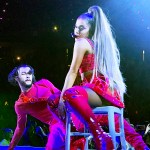 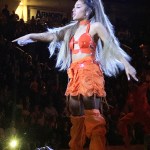 Ariana Grande hit the stage in the hometown of her late boyfriend Mac Miller on June 12, & got visibly emotional during several of her songs. Now, fans are sending their love to the singer.

It was an emotional night for Ariana Grande, 25, during the Pittsburgh stop of her Sweetener tour. The city is the hometown of late rapper Mac Miller, the long-time boyfriend to the pop singer, who struggled through some of her songs on stage that night. Clearly, Mac was top of mind as Ari belted out her biggest hits, and during one particular song, “Raindrops,” she broke town in tears and couldn’t finish the song, according to fans in attendance. When the song was initially released, it was speculated to be written about the rapper.

The pop star also faltered momentarily while performing “Thank U, Next,” which contains a direct mention of Mac in one of the first verses. When she got to her famous line: “Wish I could say thank you to Malcolm ’cause he was an angel,” she was so choked up that she was unable to say his name. When one fan shared a video from the night, they included a loving message for the singer. “In this moment, the city of pittsburgh’s love for malcolm shined through so so so much. everyone in this arena screamed it. the most special thing i have ever been a part of. we miss u. we love u.” the fan sweetly wrote. You can see a snippet from the performance below.

While videos of the singer performing the songs in Pittsburgh are scarce seeing that fans are trying to be sensitive, they were sure to speak out and send their love to Ari. “Tonight was a difficult show for her, there are videos of ‘Raindrops’ but we are choosing not to post. We hope everyone understands and doesn’t spread the videos. Instead let’s spread positivity,” one popular fan account explained. Everyone in attendance was heartbroken after seeing Ari go through a tough time. “I can’t believe ariana was crying last night :( it makes me so sad,” one person said. “Last night in pittsburgh ariana was crying during raindrops and couldn’t finish the song poor baby,” another wrote.

in this moment, the city of pittsburgh’s love for malcolm shined through so so so much. everyone in this arena screamed it. the most special thing i have ever been a part of. we miss u. we love u.

thank u for this, @ArianaGrande. this city loves u. #SweetenerPittsburgh pic.twitter.com/FLtmnnaF61

You can see a short clip of Ariana performing the beginning of “Thank U, Next,” above. We’re sending love Ariana’s way after the emotional night.