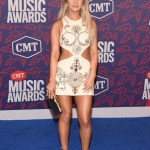 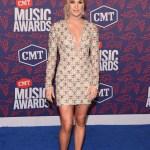 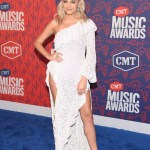 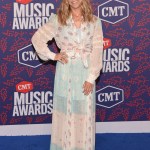 Maren Morris stunned in a look unique to her style at the CMT Awards & we’re loving it!

Maren Morris, who is always making bold fashion statements, did it again at the CMT Awards! The “GIRL” singer stunned in a tan mini dress that was embellished with paisley-like swirls and patterns by Fausto Puglisi. She showed off her training with Erin O’Prea with her abs peaking out in the cut-outs on both sides of the dress. She added some more sparkle with jewels by Ofira, and topped off the look with heels and a clutch by Jimmy Choo! Maren was joined by her country crooner hubby, Ryan Hurd, who looked equally fab in a Joseph Abboud suit, and a silk printed button-down shirt by The Ziran and shoes by Bruno Maglio.

Then, Maren took the stage to sing her song “Shade” from her new album “GIRL.” Rocking a strapless sparkling gown and long blonde locks, she showed off her vocal talent at first with the stripped down ballad before taking it into a jazzy bridge, where she riffed with her band jamming out. Maren was then joined by icon Sheryl Crow and the two sang their new anthem “Prove You Wrong,” that also features Stevie Nicks on the recording.

Maren Morris’s last CMT Awards appearance was in June 2016! At the time, she and Ryan we’re even engaged, but walked the carpet together, and looked just as great as they do tonight. At that show, Maren sang her hit “My Church” on the side stage, and joined Brett Eldredge and Keith Urban to sing “Wasted Time.” The Grammy nominee has come a long way since the moment, this year earning three CMT Award nominations! Maren was nominated for CMT Performance of the Year, Video of the Year and Female Video of the Year.

Maren’s nominated performance was from her duet with Brandi Carlile at the CMT Artists Of The Year event, where they belted “(You Make Me Feel Like) A Natural Woman.” For both video nominations, the video for Maren’s new album title track “GIRL” is nominated. “Having worked with Dave Meyers on “The Middle” music video, I love how diverse his resume is with his music videos and even his commercials. They always have a really distinct meaning in them,” the My Church singer EXCLUSIVELY revealed to HollywoodLife.com after releasing the video.

“I just felt so lucky to get to work with him on this song because I knew he’d bring it to life. Luckily we’ve really had time to really fine-tune the treatment and make it accessible for not just right now, but years to come. We didn’t want to timestamp it with a really specific historical thing.”

Be sure to tune in tonight to the CMT Awards at 8 PM ET!