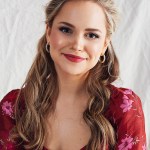 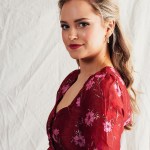 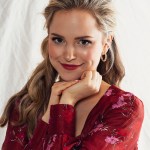 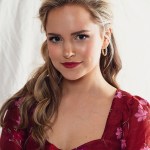 In her Broadway debut, Stephanie Styles decided to go big! The ‘Kiss Me, Kate’ star talked to HL about her incredible and thrilling dance numbers!

As Lois Lane in Kiss Me, Kate, Stephanie Styles sings while suspended in the air, laying backwards on a ladder while her head tilts even further back toward the audience. Did we mention she is singing?! The 27-year-old blonde revealed that from her audition for the show, she had the go-getter attitude, just like her character, that made the show’s creative team ready to throw her just about anything. “If you would have told me, “You’re going to be singing upside down on Broadway,’ I probably wouldn’t have been like, ‘Oh that will be easy for me to learn!’ But, now it’s just a part of life, doing this every day, it’s the most fun ever!” Stephanie exclaimed in an EXCLUSIVE interview with HollywoodLife.com. “I pretty much did a whole vocal lesson upside down and learned to engage my quads, because everything else is suspended in the air! But now, it’s weird for me to sing that part right side up!”

In the show, Stephanie’s Lois is a sweet and somewhat naive up and coming star who, along with her husband Bill (Corbin Bleu), gets her big break in a Fred Graham production of The Taming Of The Shrew. “Throughout the course of Kiss Me, Kate, Lois’s dream is coming true. I don’t think she’s the most talented person, but I don’t think she’s bad, so the idea of these two and a half hours being the culmination of everything she’s wanted, she’s so hopeful, she’s driven, but just in a way she’s YOLOing, like living her best life,” Stephanie explained. “She really just wants to be positive and rise above, and I just think she’s a very happy character, and that’s something that can get lost in her sexiness.”

In addition to starring in the Kiss Me, Kate revival, which has nabbed four Tony nominations, Stephanie also had a role in Olivia Wilde‘s Booksmart, which she called “amazing” and “iconic.” “I think that the best thing about Booksmart is that you have these genius women making the movie that they want to see, from the writers, to Olivia, to Beanie [Feldstein] and Kaitlyn [Dever] — I think they’re icons,” she gushed. “I think everyone will be dressing up as their characters for Halloween this year.”

Honestly, we may dress as Lois Lane this year. Make sure to see Kiss Me, Kate through June at Studio 54 and catch Booksmart in theaters!