Taylor Swift and Brendon Urie just brought a WHOLE lot of fun and color to the May 21 finale of The Voice. The singers teamed up for a performance of their hot new hit, ‘ME!,’ and it was definitely a party! Taylor looked absolutely gorgeous in a long-sleeved pink dress, which featured a fringed hemline. She had her hair pulled back into a ponytail and wore pink lipstick and eyeshadow to really embrace the bubblegum look! Meanwhile, Brendon also wore a light pink outfit and a magenta blazer. So epic!

The bright colors fit right in with the fun, pastel aesthetic that Taylor has been pushing throughout her latest era of music. It all started in the weeks leading up to the release date of “ME!,’ when Taylor began wearing outfits and posting Instagram photos that fit the colorful theme. “ME!” came out on April 26, and fans have been waiting for more news about new music ever since. So far, Taylor has not confirmed the title or release date of her upcoming seventh album, although she did confirm that she finished it back in February.

Taylor and Brendon are just two of the many stars who will hit the stage during The Voice finale: BTS, Halsey, Jonas Brothers, One Republic and more are slated to perform. Plus, all four of the season 16 finalists will get to sing with celebrities during the two-hour event. 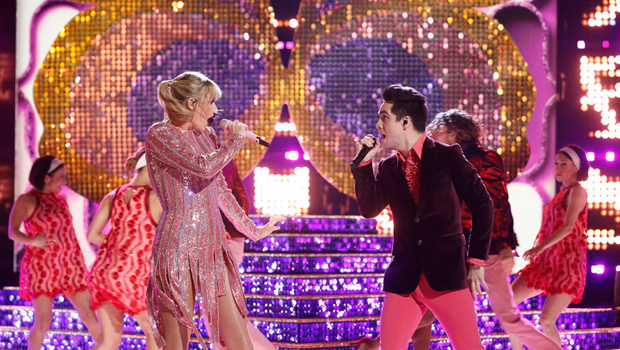 Of course, the biggest moment will come at the very end of the night when a winner is crowned. Blake Shelton has three artists — Gyth Rigdon, Andrew Sevener and Dexter Roberts — vying for the top spot, while John Legend has one — Maelyn Jarmon. Unfortunately, Kelly Clarkson and Adam Levine’s artists were all previously eliminated, but they have a front row seat to quite a fun show…with no pressure!