Melissa McCarthy is a star! The actress, who is nominated for a Golden Globe, stunned on the red carpet in a purple dress with jeweled stars on January 6! See her full look!

Melissa McCarthy, 48, shut down the red carpet with her layered, long-sleeve purple dress by Reem Acra for 11 Honoré at the 76th annual Golden Globes in LA on January 6! The actress, who was accompanied by her actor husband, Ben Falcone, 45, wore her confidence on her sleeve, literally. — Her dress was embellished with jeweled stars spread across her right shoulder. McCarthy rocked a red lip and loose waves to top off her look.

Tonight “means everything” for McCarthy. She’s nominated for Best Performance by an Actress in a Drama Motion Picture for her work as Lee Israel in Can You Ever Forgive Me — a film about a troubled New York writer [Israel] turned criminal that tussles between comedy and drama. “I fell in love with Lee Israel although she’s difficult and challenging,” she told Ryan Seacrest, 44, on the red carpet.

When McCarthy gushed about the film prior to the Globes, she praised her co-star. “It means everything,” she told E! News in reaction to her Golden Globe nomination. Standing next to her co-star, Richard E. Grant, who plays Jack Hock in the film, McCarthy admitted that they met for the first time on set. “[We] just clicked, we became friends.” 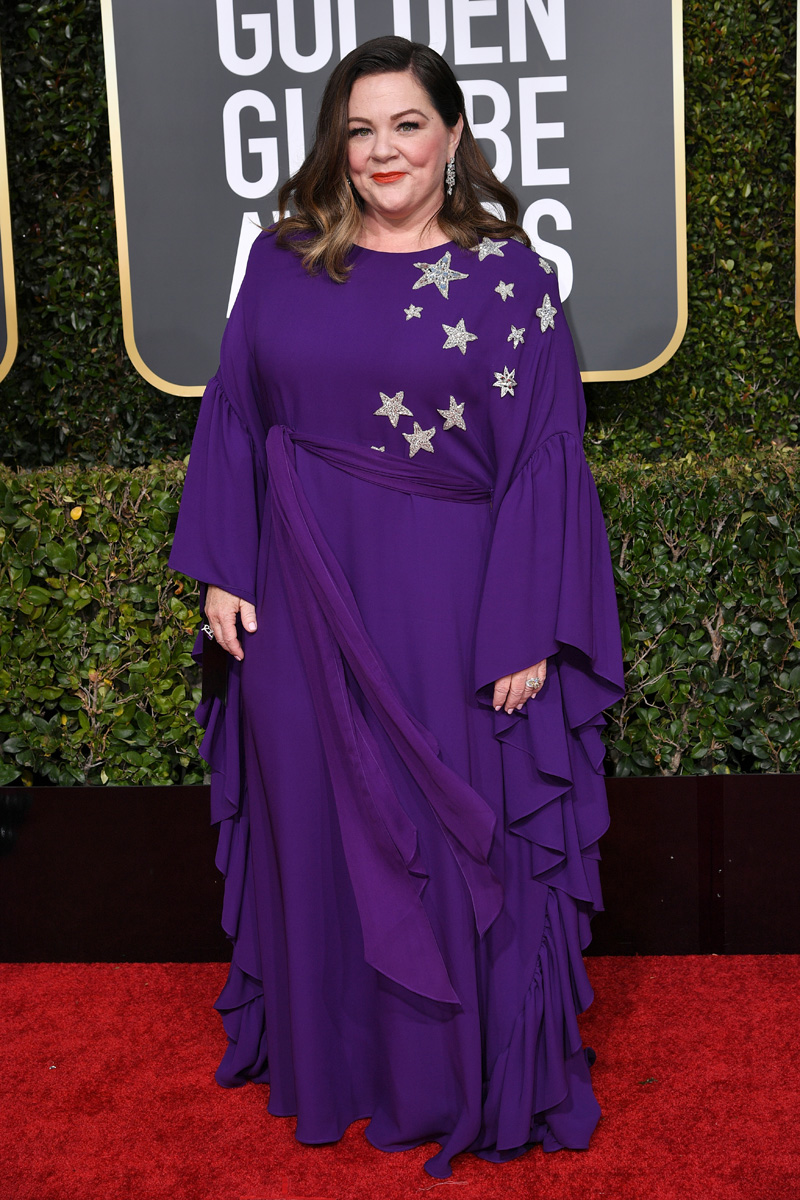 Melissa McCarthy on the red carpet at the 2019 Golden Globes in LA on January 6.

In the film, Jack joins Lee in her deception, which creates for a beautiful and loyal (or so she thought) friendship. “I love these characters, I love them together, I love their individual struggles and I love their weird, non-romantic love affair. There was a sweetness to it,” she said of Jack and Lee’s relationship.

When asked if she thinks she has to remind Hollywood that she’s also a dramatic actress [along with being a comedic actress], McCarthy explained: “I’m a character actress. Hopefully you just pick the parts and the stories you love… I think if you try and pick on what the reaction should be, you’ll be in trouble.” If she takes home the Golden Globe for Best Performance by an Actress in a Drama Motion Picture for Can You Ever Forgive Me, McCarthy will prove those who think she cannot take on a dramatic role very wrong.