Melissa McCarthy just keeps getting slimmer by the day. After losing 75 pounds she’s still shedding more weight and looked incredible in a fitted black dress at the 2019 Oscar nominee luncheon. We’ve got the pic.

Melissa McCarthy has become the incredible shrinking woman. After losing 50 pounds in 2015, not only has she kept it off, the star has kept going with her weight loss. The 48-year-old flaunted her fab figure on Feb. 4 at the 2019 Oscar nominee luncheon in a fitted black dress that showed off her well-formed waistline. It featured a flared skirt at the bottom, but the rest of the frock hugged her trimmed down curves.

Melissa’s face is noticeably thinner, and she appeared even more slimmed down from just a month ago when she attended the 2019 Golden Globes on Jan. 6. She wore a purple gown that was somewhat voluminous, but her waistline appeared wider with a belt that rode higher on her torso. Either that or the dress just wasn’t tailored that well. Now she has a tight waistline in the black dress at the Oscar nominees luncheon, where Melissa was honored for her Best Actress nod for the drama Can You Ever Forgive Me?

We can’t wait to see what Melissa wears to this year’s Academy Awards ceremony on Feb. 24. Whatever the gown, it will be a far cry from when she was nominated for Best Supporting Actress for her hilarious turn in 2012’s comedy Bridesmaids. Back then when she was heavier she had a difficult time finding a designer who would create a gown for her, even though she was a friggin Oscar nominee. “Two Oscars ago, I couldn’t find anybody to do a dress for me. I asked five or six designers — very high-level ones who make lots of dresses for people — and they all said no,” Melissa told Redbook in 2014. 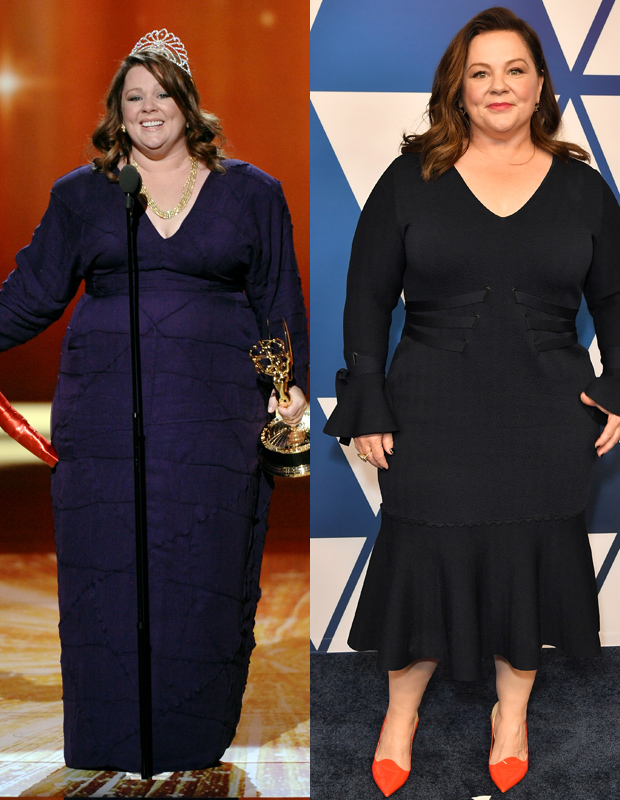 As for how she lost 50 pounds, Melissa confessed to Life & Style in 2015 that, “I truly stopped worrying about it. I think there’s something to kinda loosening up and not being so nervous and rigid about it that, bizarrely, has worked.” She also had to gear up for fight scenes in that year’s movie Spy with healthy workouts. “The second I knew I was doing the movie, I started training with an amazing martial arts instructor,” she added. That was four years ago and she just kept going, dropping another 25 pounds!