Friendship truly is magical. For those who don’t know, we live in a world where the heavily tattooed punk drummer Travis Barker, 43, is close with Keeping up with the Kardashians star Kourtney Kardashian, 49. This unlikely friendship was put on display on Dec. 2 when Kourt and Travis took their respective kids out for ice cream. This sweet treat comes after months of reports that these two are supposedly more than friends, as some have speculated that they might actually take things to the next level.

At first glance, it would seem that Travis and Kourt would be total opposites. She’s reality television royalty and he’s drummed in suck punk bands like The Aquabats, Transplants, and most famously, blink-182. Yet, as it turns out, they’ve been friends for many years and have been neighbors in the same gated community in Calabasas. On top of that, Kourt’s eldest kids, Penelope, 6, and Mason Disick, 8, are good friends with Travis’s 15-year-old son Landon and 13-year-old daughter, Alabama. Kourt, Travis, and Khloe Kardashian, 34, sometimes bump into each other at the local gym, too, per E! News.

Kourt and Travis have been spending a lot of time together recently. The two attended church together in September after Travis got fans speculating over a possible new romance with an Instagram comment. Kourt uploaded a picture of her on a bicycle on Aug. 26, per Life&Style, with the caption, “Wanna [bike emoji]?” Travis responded with “[Bike emoji][puff of smoke],” which got fans begging them to start dating. Kourtney’s family and friends are “convinced the pair would make the perfect couple,” reports RadarOnline, adding that Travis has supposedly “always had a thing for her.” 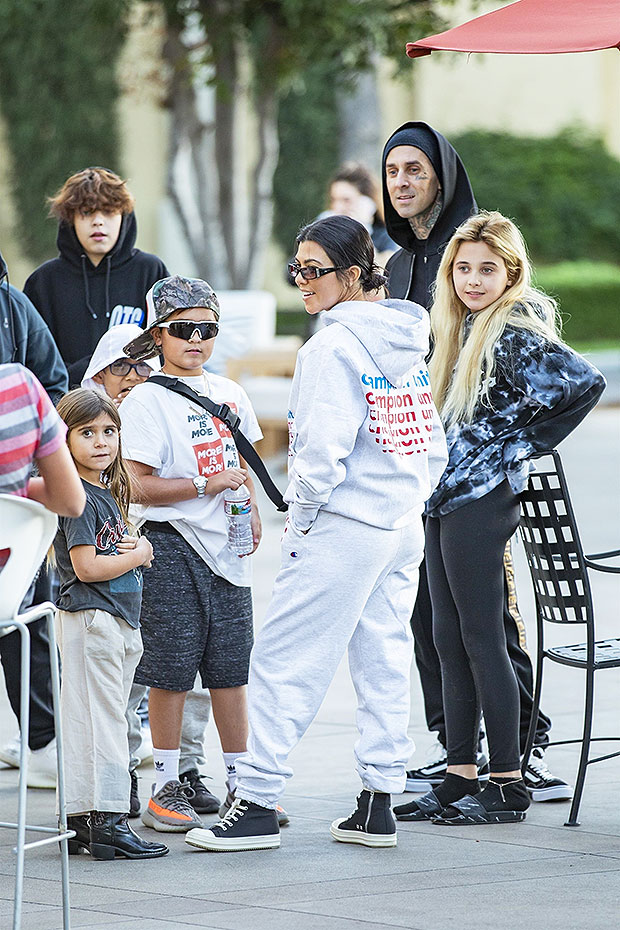 Travis has been married twice: first with Melissa Kennedy, which lasted nine months before he filed for divorce in August 2002. He and Miss USA 1995 Shanna Moakler were wed on Oct. 30, 2004. The couple welcomed Landon in 2003 and Alabama in 2005. Travis filed for divorce in August 2006, but they went through a period of being “on-again/off-again.” Ultimately, they pulled the trigger and finalized the split in 2008. Travis briefly dated Rita Ora in late 2015 but hasn’t been exclusive to anyone since then. Kourtney’s been single since splitting from Younes Bendjima earlier in the year, so it seems that if these two were to give romance a go, now would be the time.