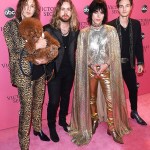 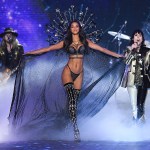 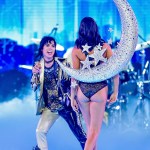 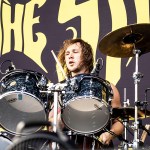 There’s going to be a little bit of rock among all the lace at the Victoria’s Secret Fashion Show, as The Struts are set to light up the runway with their glam rock sound. Get to know more about these Brits!

When the Victoria’s Secret Fashion Show airs on Dec. 2 at 10 pm ET /9 PM CT, it’ll feature more than some of the world’s most glamorous models in exquisite lingerie. The show will also have a bevy of musicians rocking out! Some acts seem a natural fit for the show, like Rita Ora, Kelsea Ballerini, Halsey, Shawn Mendes, and The Chainsmokers. Yet, there’s one band that will be edgier — and louder — than all of them: The Struts. The British quartet will make its VS Fashion Show debut, so get to all the facts on them before they hit the stage.

1. They’re a rock band from Derbyshire, England…. The Struts — Luke Spiller, 30, Jed Elliott, 27, Adam Slack, 27, and Gethin Davies, 26 – came together in Derby around 2009 (before fine-tuning the lineup in 2012.) They put out their first single, “I Just Know,” in 2012 and released a subsequent EP, Kiss This, that same year. In 2014, they opened for The Rolling Stones in Paris, performing in front of 80,000 people. 2014 was also when they released their first studio album, Everybody Wants, and they dropped their sophomore effort, Young & Dangerous, earlier this year.

2. … who have blown up in the States. Though they have a reputation as being a great live band, The Struts have “struggled to get traction” in the UK, as radio stations prefer “more mainstream-sounding artists,” per the NME.

“The short story is we were inherited from a certain label, and we put out this album, nothing really happened – we had no press, no radio, apparently radio didn’t want to play it,” lead singer Luke said. “We were very much in the dumps, and we made some internal changes, and upon doing so we came into contact with these American managers, which heard the same music, the same mixes, the same album and took it straight to American radio and it went straight up to the top. All of a sudden it was like pack up your bags, you have to leave – and you won’t be coming back.”

3. They’re ushering in the return of glam rock. From David Bowie to Slade to The New York Dolls, glam rock was a signature of the 1970s, playing with camp and androgyny while mixing all sorts of influences into a wild scene (and a wilder sound.) Good news, everyone! The Struts are bringing it all back.

“A new era of glam rock,” Luke told the NME. “To get more specific, I think we have this great mixture of The Rolling Stones and Queen, kind of like fused together, and when you do that you get this real broad and magnificent sound, where you can downplay it a little bit or go really theatrical.”

4. Dave Grohl is a huge fan. When it comes to rock, Dave Grohl, 49, knows a thing or two. The former Nirvana drummer told Radio X in June 2018 that The Struts were his pick for the best band to ever open up for the Foo Fighters. “I guess they don’t get a lot of love in England, but in America, they’re the best opening band we’ve ever had”, Dave said. “That kid Luke, the singer, it’s unbelievable. He’ll walk out in front of an audience in Tulsa, Oklahoma, where nobody has ever heard of them and by the end of the show he’ll have the entire audience in the palm of his hand. I love seeing that. To see an audience turn like that is not easy.”

An absolute pleasure to have @iiswhoiis join us for #BodyTalks on @FallonTonight last night! If you missed it, head over to the link in our story to watch 👀 We'll be reunited in Atlantic City this Friday night! If you don't have tickets yet, get yours now st thestruts.com x

Had an absolute BLAST making this commercial for our brand new @OriginalFunko FunkO’s Cereal 😂🥣 And of course there is a prize inside… A limited-edition 7” record and digital download of our unreleased song “21st Century Dandy”! Preorder now at @OfficialFYE - link in story.

5. There may be a strange collaboration in the future. POP and ROCK collide in an explosion of love. The Struts’ bassist Jed Elliot has been dating Little Mix’s Jade Thirlwall since January 2016. Will this lead to a Little Mix x The Struts collab? Probably not, but Jed might have to swipe some Victoria’s Secret lingerie for his girlfriend after performing at the show.