Halsey, 24, turned up the heat big time when she hit the stage at the 2018 VS Fashion Show on Nov. 8. The singer sizzled in a white crop top and barely there skirt. Her incredibly toned abs were on full display as she performed her hit “Without Me,” and she also had feathered eyebrows. During her performance, Bella Hadid, 22, walked the runway and they shared an adorable moment! Elsa Hosk, 30, also walked the runway while wearing the coveted and very gorgeous Fantasy Bra during Halsey’s performance!

On the pink carpet, Halsey rocked a lingerie-inspired outfit. The singer dazzled in a sheer black mini dress. Her look from head to toe was super vampy, and we’re obsessed. Halsey slays all day, every day!

Just before she performed, Halsey posted one hot photo on her Instagram. Eat your heart out G-Eazy! She rocked sexy lingerie and a VS Fashion Show robe. “Worked so hard for this! 💋💋💋 #vsfashionshow thank you guys!” she captioned the steamy photo. This marks Halsey’s VS Fashion Show performance debut. She’ll be performing alongside Shawn Mendes, The Chainsmokers, Bebe Rexha, Kelsea Ballerini, Rita Ora, and The Struts. 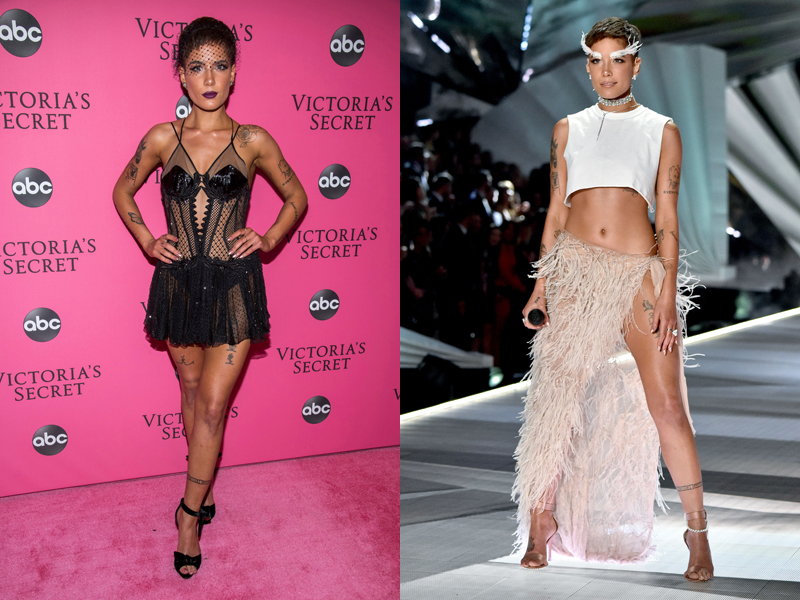 Only days before the VS Fashion Show, Halsey performed “Without Me” at the MTV EMAs. The performance was her live debut of the song! She took her performance to a whole new level by singing in the rain. When it comes to performing, Halsey always goes all-out. Speaking of going all-out, Halsey did that for Halloween 2018 as well. She sizzled in the sexiest Poison Ivy costume we’ve ever seen. If Victoria’s Secret needs an extra model, Halsey could most certainly be one! Make sure to tune-in to the airing of the 2018 Victoria’s Secret Fashion Show on Dec. 2 at 10 p.m. on ABC.

Related: Halsey’s Parents: Everything To Know About Their Mom & Dad & Their Relationships