Seriously, we can’t get over how much this little one has grown! We were shocked when we saw the first pics of 12-year-old Barron Trump since he was last spotted in August, because of how much he’s grown in just three months. That was made even more apparent when the first son arrived back home in Washington, DC, after Thanksgiving and walked side-by-side with his parents. You may not realize this from only seeing him on TV, but President Donald Trump stands at 6’3″.

First Lady Melania Trump, a former model, is particularly tall, as well, at 5’11”. It’s unclear exactly how tall he is, but in new pics, their son is absolutely towering over her! It appears that Melania is also wearing a pair of her signature sky-high heels, which likely puts her at 6’0. He may be his father’s height, actually, and he’s still just a preteen. Who knows how tall this kid is going to get?

We rarely see photos of the president’s youngest child, so it’s always a treat when we do. It’s not unusual that Barron’s stayed out of the spotlight; his mother vowed when his father won the presidency that she’d try to keep the youngster’s life as normal as possible. Though Trump was sworn into office in January 2017, Melania and Barron didn’t join him until that May, when Barron’s school year ended in New York City. Barron doesn’t participate in many White House events, including this year’s White House Turkey Pardon on November 20. However, he was spotted with his parents and siblings boarding Air Force One later that day, en route to their holiday celebration at Mar-a-Lago in Florida. 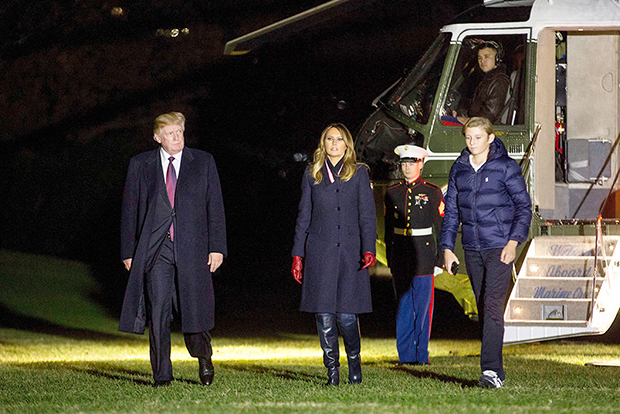 For more pics of the first son and his family, scroll through our gallery above! While he may not appear at the White House frequently, it’s always memorable when he does!