First Son Barron Trump is rarely seen in public, as protective mom Melania has done her best to keep her 12-year-old’s world as private and normal as possible since they moved from New York City and into the White House in May of 2017. He hasn’t been photographed since August and in new pics take on Nov. 20, he’s as tall as his 5’11” former model mother and is inching closer to his dad Donald Trump‘s 6’3″ stature.

With parents that tall, it’s only natural Barron would have serious height. But he’s only 12 and is still growing! At this rate he could easily surpass both his folks. The youngster was photographed with his parents on the South Lawn of the White House as they made their way to Marine one to fly to Andrews Air Force Base. The first family took Air Force One to Palm Beach, FL to spend the Thanksgiving Holiday at the Trumps’ Mar-a-Lago estate.

Barron hasn’t been seen since last August, when he boarded a flight back to Washington D.C. from Bedminster, NJ when his summer break came to an end. Unlike in 2017, he did not appear at the annual presidential turkey pardoning earlier in the day. Melania was by the Commander-in-Chief’s side wearing an unusual Dior color blocked coat in tan, white, red and black that had the internet divided on the look. 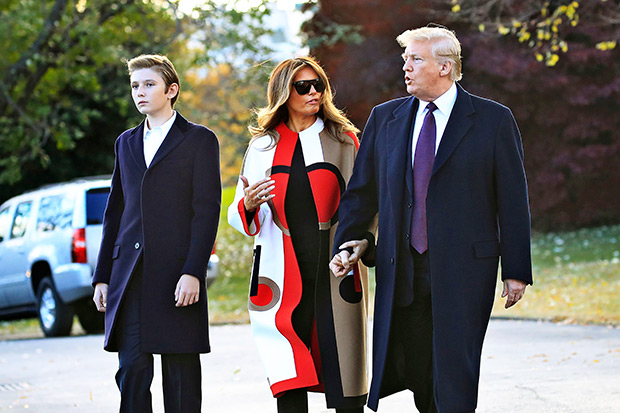 Barron also skipped out on attending the arrival of the White House Christmas tree on Nov. 19. The Fraser fir arrived from
a farm in Newland, N.C. aboard a horse-drawn carriage. The president and Melania were there to greet the holiday arrival, but Barron did not attend like he did in 2017. The only White House event he’s participated in during 2018 was the Easter Egg Roll in April.