Victoria’s Secret may want to tap Halsey, 24, as a model for its 2019 runway show! The singer blended right in with the rest of the models as she made her way to the official VS after party at Avenue in New York City on Thursday, November 9, 2018. Halsey looked like she just stepped off the runway in a dark, metallic wrap dress with a built-in bra and chain. The “Without Me” singer showed off her incredibly fit body as she made her way to the party hand-in-hand with Bella Hadid, 22.

Halsey, with her spray tan on point, sported her fierce pixie cut for her big night out. She paired her look with a feathered accessory and open-toe black stilettos. Meanwhile, Bella went braless in a sheer beige dress, which showed her nipples. They also headed to the VS after party with Bella’s beau, The Weeknd, 28. He threw the middle finger at photogs on their way inside Avenue, as the ladies just giggled alongside him.

Before the after party, Halsey hit the VS pink carpet, where she stunned in a sheer black dress. She bared her midriff in the cut-out mini, and even showed off her black undergarments. The singer had total of three outfit changes during her VS debut as the show’s performer. 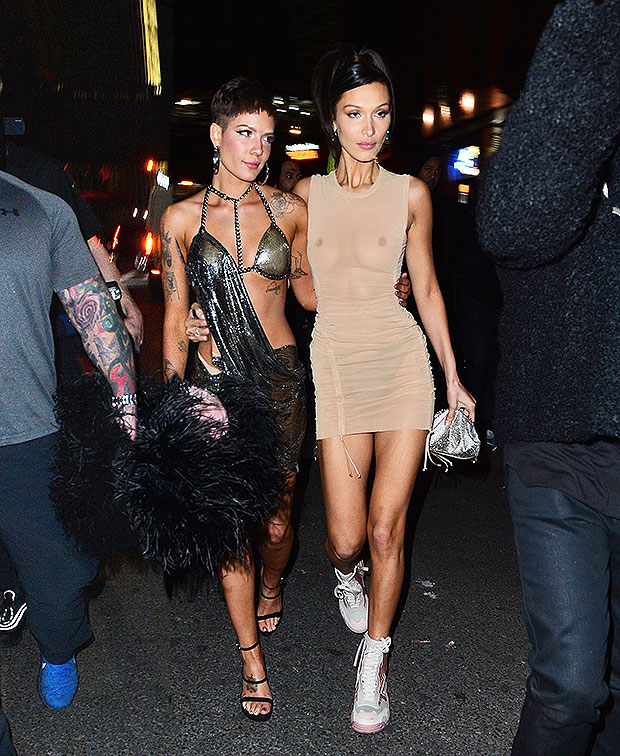 Halsey and Bella Hadid hold hands on their way to the Victoria’s Secret after party at Avenue in New York City on Thursday, November 9, 2018. 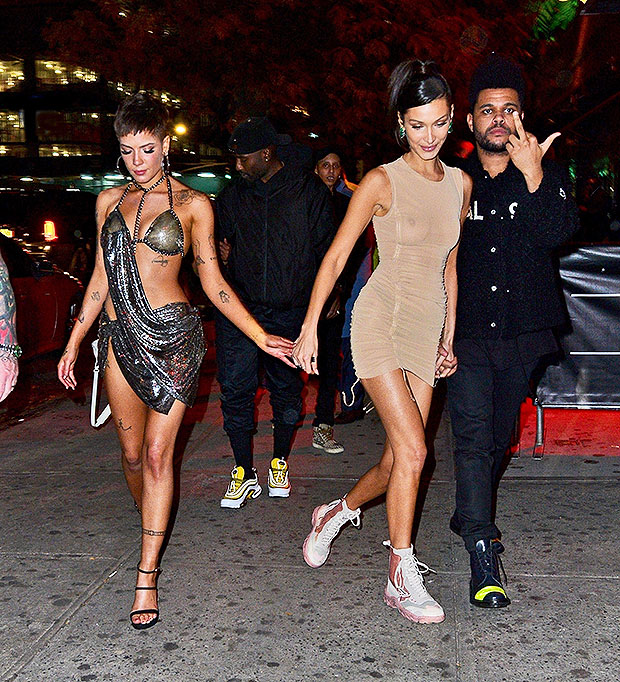 Halsey and Bella Hadid hold hands on their way to the Victoria’s Secret after party at Avenue in New York City on Thursday, November 9, 2018.

Halsey performed her latest single, “Without Me”  during the annual show. While on the runway, she also held hands with Bella, who modeled the lingerie brand’s latest creations. Halsey also donned a feathered skirt with a white crop during her performance. VS also managed to bring together some of music’s biggest names to serenade the broadcast, including, Shawn Mendes, Rita Ora, The Struts and Kelsea Ballerini with the Chainsmokers.

This year’s VS Fashion Show, which took place in New York City, was one of it’s most star-studded in terms of runway models. Kendall Jenner and Gigi Hadid returned to the the catwalk after skipping last year’s show in Shanghai, China. Winnie Harlow, and returning regulars, Devin Windsor, Shanina Shaik, Joseline Hernandez, Stella Maxwell, Barbara Palvin, Romee Strijd and Taylor Hill all walked as well. Veteran angels, Behati Prinsloo and Adriana Lima also hit the runway, with this being Adriana’s final VS Fashion Show. — While the show was taped on November 8, it will not air until December 2.