19-years after her memorable appearance at the ‘Notting Hill’ premiere, Julia Roberts has opened up about her decision to bear armpit hair on the carpet.

Julia Roberts, 51, was well ahead of her time when she daringly sported unshaved armpits at the 1999 Notting Hill premiere, but, the actress is just now revealing some new details about her look that day. According to the star, she wasn’t exactly trying make a feminist statement. “The picture is vivid in my mind actually from that moment. I think I just hadn’t really calculated my sleeve length and the waving, and how those two things would go together and reveal personal things about me,” she revealed in an interview on Busy Tonight. “So, it wasn’t so much a statement as it’s just part of the statement I make as a human on the planet, for myself.”

The au naturel look from the actress might not have been intentional, but it did garner quite the amount of attention at the time. Julia wore a sleeveless red dress that night, but fans were shocked to see what she was working with once she lifted her arms! As she waved to the crowd from the red carpet, Julia revealed a thick mass of hair beneath her arms, and the moment instantly became an iconic one, despite what Julia has now revealed. In a time where it’s cool to rock unshaven arms, at least she’s honest!

The notorious Notting Hill moment isn’t the only thing Julia touched upon in the interview. She also chatted with Busy about the challenges of keeping up with social media lingo. Thanks to her kids, 11-year-old Henry Daniel, and twins Hazel Patricia and Phinneaus “Finn” Walter, 13,  she manages to stay afloat. However, when she recently replied to a fan who had shaded her on Instagram, she had an eye-opening experience. “I did not mean to clap back. I’d never heard the words clap back,” Julia admitted. “I was just being amusing. Something stumbled into my eyeball range and I was like, ‘Oh.’ And I just was being funny and a little school-teacher-correcting. And then people were like clapback.” 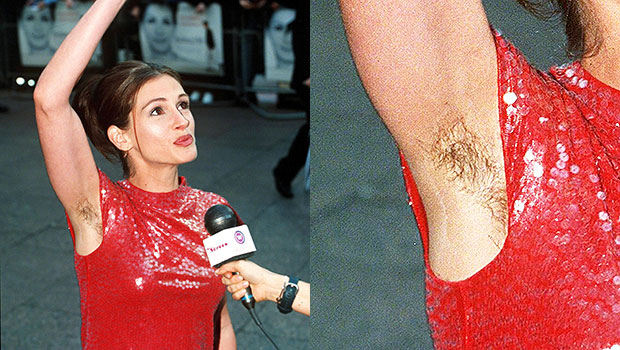 Julia has also been making headlines for her performance in the thriller series, Homecoming. The web TV show is currently streaming on Amazon Prime.