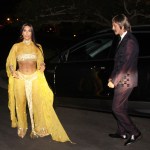 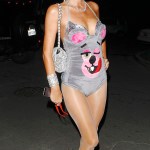 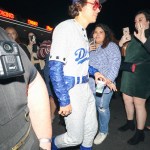 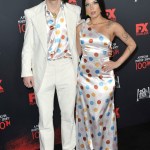 Kim Kardashian attended Kendall Jenner’s Halloween-themed birthday bash on Oct. 31 dressed as Pamela Anderson, and it was EPIC. The costume was a re-creation of Pam’s 1999 look at the VMAs, and Kim totally nailed it. She rocked the sparkling, sequined pants, white corset top and fuzzy pink hat like a PRO! She even caked on blue eye shadow and drew a fake tattoo on her arm to completely embody the look, while also wearing a blonde wig. Plus, her bestie, Jonathan Cheban, dressed as Tommy Lee, who attended the show with Pam in 1999, even though they were divorced.

<Unfortunately, even though Kim got all the nuances of the costume down, it didn’t go over well with the younger crowd in attendance at Kendall’s bday bash. The reality star revealed on her Instagram story that most of the attendees didn’t even know who she was! Form Jaden Smith to Moises Arias and more, the kids were completely in the dark about Kim and Jonathan’s look! Luckily, Kylie Jenner showed up just in time and knew exactly who her big sister was…and gave the costume her seal of approval!

This Halloween look comes after Kim and all her sisters dressed as Victoria’s Secret Angels earlier this week. All five ladies — Kim, Kylie, Kendall, Kourtney Kardashian and Khloe Kardashian — wore actual VS runway looks, along with the iconic wings that’ve been worn by the models themselves. SO sexy!

Meanwhile, Pam isn’t the first celebrity Kim has dressed as for Halloween. Last year, she was Selena Quintanilla one night, and Madonna another night. Every single time, she gets the looks JUST right. We already can’t wait to see who she is next year!