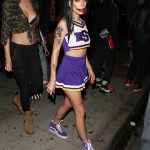 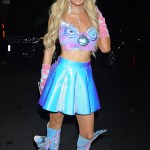 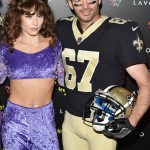 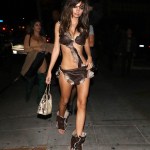 The Kardashian-Jenner sisters really outdid themselves this Halloween! Kendall, Kylie, Kim, Kourtney and Khloe all showed off their incredible bodies in white lingerie and angel wings and the photos are TOO GOOD!

The Kardashian-Jenner sisters just won Halloween! Kendall, Kylie, Kim, Kourtney and Khloe all channeled their inner Victoria Secret angel for the holiday in which they’re known to go the extra mile for. The sisters all wore their own type of white lingerie, showing off their toned figures. They even sported white, feathered angel wings as they stepped out for a Halloween bash in LA on Wednesday, October 30! SEE THE PHOTOS HERE!

New mothers, Kylie and Khloe looked incredible in their respective angel outfits. Khloe, who gave birth in April, showed off her post-baby body in a two-piece, white lace lingerie set. Her toned legs and cleavage were on full display, and you could tell she’s been putting in major work in the gym – a place she’s credited for easing her mind. Khloe also sported long blonde, wavy locks.

Meanwhile, Kylie, who gave birth in February, donned a separate look from that of her sisters. She wore a pale pink and beige bra with a  gold jeweled bodysuit that covered her legs, mid-section and arms. She too sported blond locks, but had her dark roots out. Kylie was recently seen expressing a lack of confidence in her post-baby-body during an episode of Keeping Up With The Kardashians. However, it’s quite difficult to gauge what she’s not confident about! — We mean, look at her!

Kendall looked right at home in her white lingerie one-piece, as she’s donned similar looks when she walked in the Victoria’s Secret Fashion Show. (She’s not yet confirmed for the show this year). Either way, this was a show-stopping moment for the supermodel. Her long legs were on full display as she treated the pavement like her very own runway, along with her sisters in tow.

Kourtney was a standout in white, sporting different angel wings than the rest of her sisters. It looked as if she had white, feathered spikes coming out of her back. The mom of three looked radiant in her two-piece lingerie set with a matching bustier around her waste. She let her long, dark hair down as she showed off her incredible figure.

Then, there was Kim, who as we all know has no problem showing off her curves. And, we don’t blame her! She looked amazing in thee most revealing lingerie set out of the group. She bared her cleavage in a skimpy bra top and tiny bottoms. Just like Kourtney, her hair was long, dark and down.

Each of the sisters have never looked better and the proof is in the hard work they’ve been putting in to get in fighting shape. Between Kylie and Khloe’s post-baby bodies, and Kim, Kourt and Kendall’s amazing figures, it looks like the Kardashian-Jenner sisters took over yet another Halloween holiday!