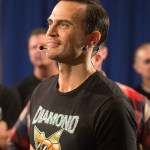 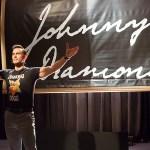 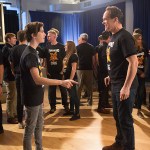 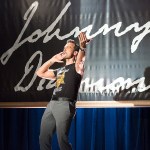 He’s back! Milo Manheim will return to ‘American Housewife’ for the Nov. 7 episode, and HollywoodLife is EXCLUSIVELY debuting the first look photos! Get ready, because your day is about to be made!

American Housewife, you are too good to us! The ABC comedy series is giving us yet another Zombies reunion when Milo Manheim reprises his role as Pierce on the Nov. 7 episode. In our EXCLUSIVE first photos from the episode, Pierce and Meg Donnelly’s Taylor will be taking the stage together to rehearse their play. Like they did in Zombies, Meg and Milo show off their stellar dance moves. But will they sing together again? Time will tell! Aren’t these photos just the cutest?!

However, it looks like there’s going to be some drama! In a few photos, Trip (Peyton Meyer) doesn’t seem to be too happy about Pierce’s return. He takes the stage and appears to get in an argument with Taylor and Pierce! How will it all go down?! This episode is going to be EPIC, that’s for sure. Be right back, going to get my DVR prepped and ready.

The synopsis for the Nov. 7 episode — titled “The Code” — reads: “After discovering that the four digit pin code the Otto family uses for everything spells out Greg’s ex-girlfriend’s name, Katie gets upset and retaliates by dragging out old gifts from past boyfriends. Meanwhile, the kids’ current love lives take a hit as Taylor and Trip argue over her relationship with Pierce, and Oliver and Gina’s relationship goes south when they both apply for a ballet scholarship that only one of them gets in.”

American Housewife airs Wednesdays at 8:30 p.m. on ABC. Milo recently guest-starred on the Oct. 17 episode of the ABC comedy. He can also be seen on Dancing With the Stars season 27 with partner Witney Carson.