Porsha Williams is heading down aisle AND welcoming a baby! The ‘RHOA’ star is reportedly engaged to Dennis McKinley. Porsha was spotted with a huge diamond ring on THAT finger, and it’s a stunner!

UPDATE: Porsha Williams, 37, is engaged to Dennis McKinley, Us Weekly reports. The pregnant Real Housewives Of Atlanta star, 37, flaunted a massive diamond ring on her ring finger on Instagram, The Shade Room revealed. “When your [sic] happy and it shows… had a blast @porsha4real,” the caption read. The gorgeous ring is oval shaped and looks like it cost a fortune! HollywoodLife has reached out to Porsha’s team for comment.

Fans started sending their congrats and sweet messages to Porsha after that gorgeous engagement ring hit the internet. “She deserves it so happy for her congratulations,” one fan commented. Another wrote, “She sooo deserves it! Happy for her.” One fan gushed, “Come thru sis!!! I’m so happy for you!! I knew God was coming through for you! You’ve worked too hard to overcome EVERYTHING!!! You deserve this happiness!!” 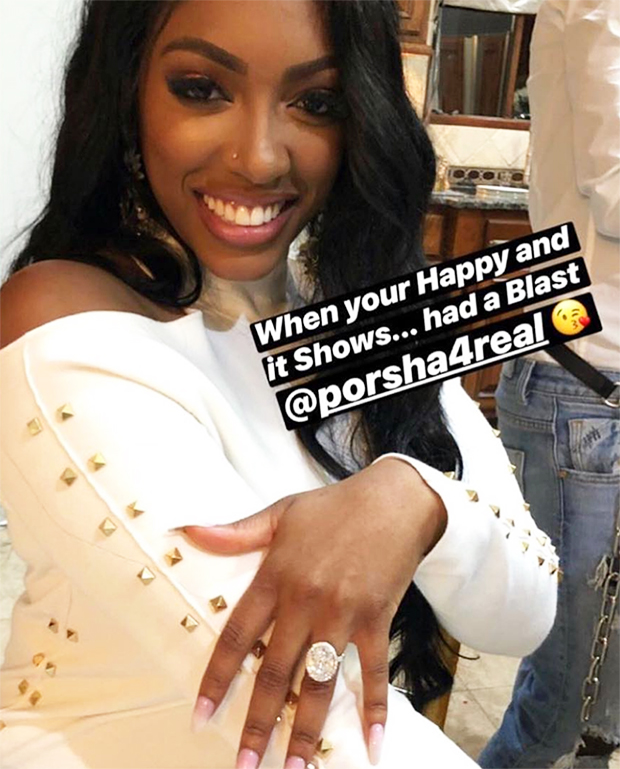 The stunning reality star is currently expecting her first child with boyfriend Dennis McKinley. She confirmed she was pregnant in Sept. 2018. “When I found out I was pregnant, I was excited, but I had mixed feelings,” she revealed to PEOPLE. Porsha suffered a heartbreaking miscarriage six years ago. “Going into the first appointment and being able to see baby and hear baby and know that baby is fine, then I can really wrap my mind around actually becoming a mommy,” she added. While she has not confirmed the baby’s sex, she did hint she was possibly having a baby girl on Instagram. She responded on Sept. 21 to an Instagram photo, “I would have her right there getting done up lol.” To top off an already incredible year, The Real Housewives of Atlanta is expected to return for its 11th season this year.