Sexy can I?! Drake looks sweaty and hot in a new snap, clearly paying no mind to Nicki Minaj’s playful diss on her new album!

Nicki Minaj may or may not love you (unclear, right now), but we sure do, Drake! The rapper was snapped pumping some iron in the gym and he looks seriously jacked. Wearing a do-rag and OVO tank top that showed his built, tattoo-covered arms, Drake looked like he was hard at work in the gym. “Me and @ipushpounds back to work,” the ‘Nice For What’ rapper captioned the photo of himself, with the angry emoji and blowing steam emoji. It appears he still hasn’t shaved his growing facial hair, but his fans didn’t seem to mind as they were all up in his comments, raving over his built figure. We can’t deny it, he looks good!

This comes just after Nicki Minaj put Drake on blast in her song “Barbie Dreams.” “Drake worth a hundred milli, always buying me s–t/ But I don’t know if the pussy wet or if he crying and s–t,” she raps on the song. While it may sound like a diss, Nicki swears that everyone she calls out on the song (which is a lot), it’s all just fun! “I only mentioned people in #BarbieDreams that I f-k wit. This isn’t a diss. Yikes. This is culture, this is BIGGIE!!!!! New York!!!! This is FUN. Light hearted fun FUN,” she wrote on Twitter after fans erupted over the potential for a feud. We also heard exclusively that Drake thought the lines about him in the song were funny, and he has tons of respect for his girl Nicki! 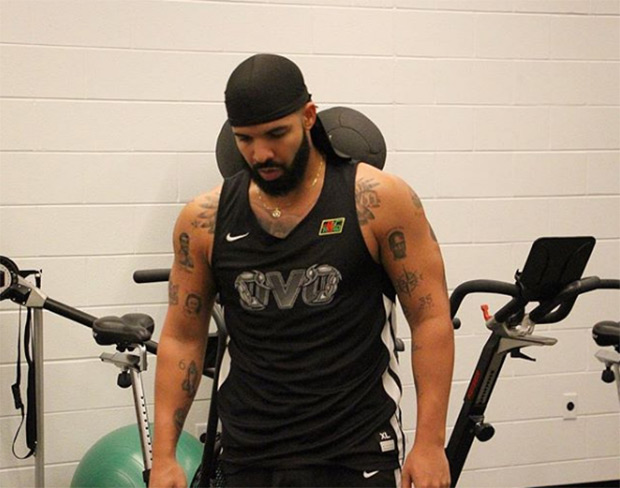 “Drake thinks it is hilarious that he got a shout out on Nicki’s new track. He is not mad or furious at all, he loves all of her new music,” an insider close to the “God’s Plan” rapper told HollywoodLife. “He has a lot of love and respect for Nicki and he thinks his mention and what she said about him on her ‘Barbie Dreams’ track was a lot nicer than what she said about Meek [Mill], [DJ] Khaled or 50 [Cent] who got it a lot worse than the playful teasing she gave him.”