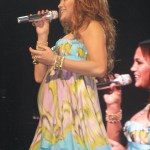 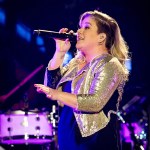 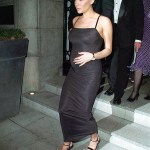 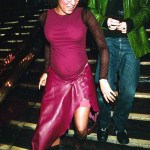 While Cardi B, Shakira and Mariah Carey have all performed pregnant, touring with a baby in your belly is an entirely different story — yet so many celebs have done it. Here’s how, according to an OBGYN.

Carrie Underwood, 35, just announced that she’s expecting her second child and that she’s going on a Cry Pretty 360 Tour, but don’t worry — she won’t be touring until 2019 after her little one has arrived. That’s what most celebrities in her position do! Performing pregnant is one thing, but can you imagine hitting the road with a baby on the way? Touring has got to be stressful enough without battling morning sickness and fatigue at the same time, which is probably why Cardi B and Beyonce have chosen to do one-and-done pregnancy performances at Coachella. But that hasn’t stopped Jennifer Lopez or Kelly Clarkson from doing the damn thing, baby bump and all — but is it safe? We spoke to a doctor about the right way to tour pregnant.

“The best time to tour is probably in the second trimester, between 13 weeks and 23 to 24,” Dr. Linda Burke-Galloway, board-certified OBGYN physician, author and blogger, explained. “At this point, you’ve usually escaped the increased risk of a first trimester miscarriage. Blood pressure has usually gone down.” But that doesn’t mean any and all celebs are good to go at this point! They should also be taking into consideration their weight, as well as any complications they’ve had with previous pregnancies. Paying attention to the energy they’re exerting while on tour is important, too! There’s a reason why Victoria Beckham and Mel B were picked up and carried around during “Walk of Life,” “Step To Me” and “Do It” during their 1998 Spice Girls tour.

The last thing a mommy-to-be wants to do on stage is treat her performance like business as usual. “You don’t want to work yourself up to a point where you’re sweating,” Dr. Linda Burke-Galloway added. “The part of the brain that regulates temperature isn’t developed yet in the fetus.” That explains Victoria and Mel’s toned-down routine! They must have been in constant contact with their doctor to make sure they were staying safe all tour long.

All things considered, we totally understand why Carrie would wait on Cry Pretty 360 until after her baby is born — but we have to give props to all of the musician mommas in the gallery above who tackled a tour while expecting. It cannot have been easy! Even Gwen Stefani, who considered herself “strong” enough for this feat, told People in 2007, “I would be seriously crying before I went onstage. I didn’t know how I was going to get through the tour, putting on nine costume changes on a stage in front of 12,000 people every night.”

And get this! Mel B, who talked about her and Victoria’s pregnancies in a 2014 interview with Meredith Viera, said Posh was battling morning sickness throughout their tour, while her pregnancy was a piece of cake. Hillary Scott of Lady Antebellum made it through most of her band’s tour while carrying her twins, but ended up canceling the final dates in South Africa for her health.

Just goes to show — every mom is different! There are a lot of factors to consider when making a big decision like this one, so we don’t blame the celebs who have chosen to press pause on touring until their pregnancy is over.