Woops! While wearing a sexy red jumpsuit to an event on Aug. 5, Tiny accidentally suffered a nip slip wardrobe malfunction — but she called herself out for it on Instagram. See the pic here!

Tiny looked HOT HOT HOT when she wore a plunging red jumpsuit to host a party on Aug. 5! The sexy mama rocked a red jumpsuit which featured a majorly plunging neckline, putting her boobs on full display. Her breasts nearly popped right out of the teeny top, and when she posed for a sexy photo in a bathtub, there was even a slight nip slip. Tiny posted the photo to her Instagram story and pointed out the wardrobe malfunction herself, clearly not caring that the world was getting a peek at her unmentionables! Clearly, she was feeling her outfit and had major confidence in how amazing she looked. SLAY, girl!

Meanwhile, during her night out, Tiny seemed totally unbothered by some recent drama she’s been going through. The 43-year-old and her husband, T.I., were recently called out on social media by Tokyo Toni, who claimed that they had a threesome with Angel Brinks. As HollywoodLife EXCLUSIVELY reported, Tokyo Toni’s allegations were “completely untrue,” although T.I. and Tiny have yet to comment on it themselves. Luckily, besides that, all seems to be going well in the pair’s up and down relationship recently. Earlier this summer, they went through a bit of a rough patch, but it appears they turned things around.

In fact, the longtime lovers just celebrated their eight-year wedding anniversary on Aug. 1, and T.I. gifted Tiny some gorgeous flowers for the special occasion. They were also recently spotted packing on major PDA as she supported him at the premiere for his new show, The Grand Hustle. 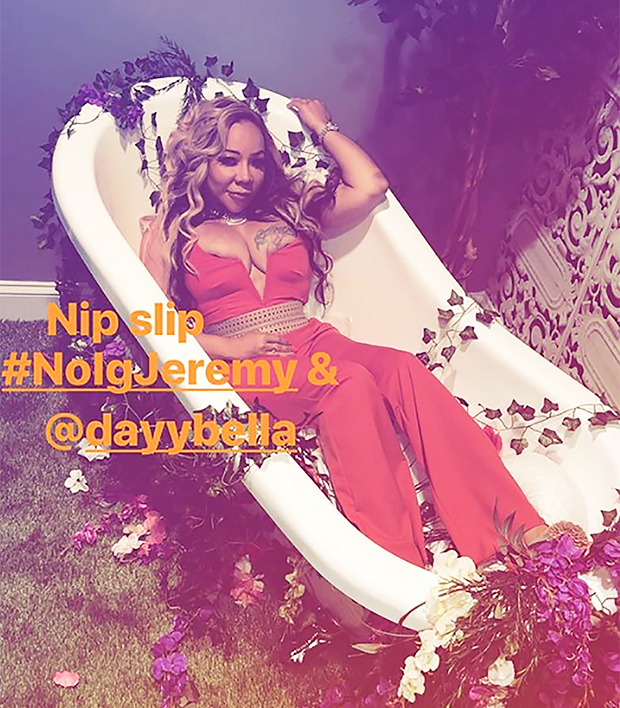 Of course, T.I. and Tiny have gone through this back and forth in their relationship plenty of times over the years, so it’s unclear how long this good phase will last — but we’re crossing our fingers for them!