We know ‘Dance Moms’ star Abby Lee Miller is one tough cookie, and that’s coming in handy as she’s battled through her fifth round of chemo to fight an aggressive cancer. We’ve got the latest pic of how she’s doing.

Abby Lee Miller isn’t letting her battle with an aggressive form of cancer keep her down. She just completed her fifth round of chemotherapy in her fight against Burkitt lymphoma, which she was diagnosed with in April. The former Dance Moms star was spotted out in LA on July 31, out of the hospital and getting some well deserved sunshine. The 51-year-old is still weak and is using a wheelchair, but was motoring along outside of a rehabilitation facility. She’s lost over 100 pounds due to the cancer treatment, as used a pink baseball cap to cover her head as sadly she’s lost most of her hair due to chemotherapy. Just a day before she posted an Instagram pic where she was all smiles during a physical therapy session. What a fighter! CLICK HERE TO SEE THE PIC.

She had been in Cedars Sinani Medical Center undergoing her rounds of chemo, and has only one round left to go in her treatment program so she’s getting close to having it all behind her. Abby has been updating fans via her Twitter and Instagram accounts on how she’s doing, and she’s actually had some interesting visitors while hospitalized. Singer Mackenzie Sol paid her a visit to strum his guitar and sing to her in between physical therapy sessions on July 14. She shared the video as he serenaded her outside of the hospital with nurses looking on. Abby thanked him “for lifting my spirits and making me forget my ailments for a while!” Later that day she shared an Instagram pic with a big smile while learning how to walk again.

Abby was also visited by psychic Thomas John, host of Seatbelt Psychic on Lifetime to give her a reading.  She thanked him via Twitter for “an amazing reading left me feeling extremely positive knowing my parents are by my side.” Hopefully he also saw good news ahead in her battle against cancer. There had been reports in early May that the chemo wasn’t working, but she’s beat the odds and has nearly made it through her full six rounds. 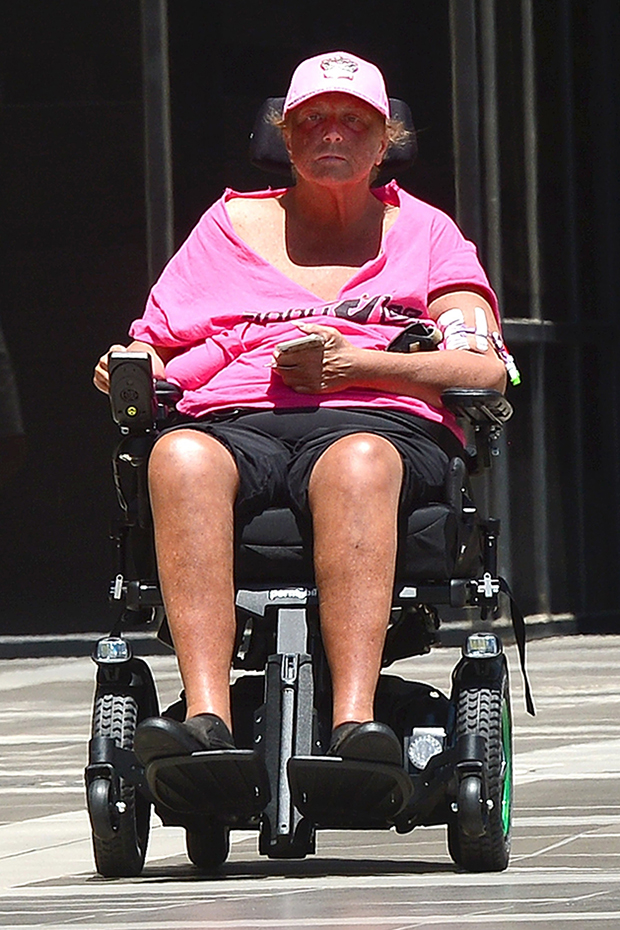 The cancer was discovered just three weeks after Abby was released to a halfway house after being released from a California prison on March 27.  She had served eight months behind bars for bankruptcy fraud. The former reality star was hospitalized on Apr. 17 for a four-hour life saving spinal surgery when doctors discovered what was thought to be an infection was actually cancer.