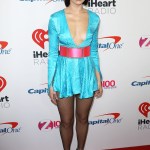 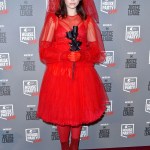 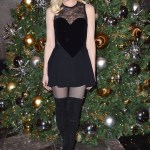 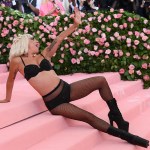 Fishnets FTW! Halsey stunned with one of the sexiest outfits she’s ever worn at Playboy’s Midsummer Night’s Dream event at the Marquee Nightclub in Las Vegas on July 28. The singer donned a halter bustier with a thong cut, a garter belt, a gold chain belt, sheer thigh-high socks, a gold necklace that said her name and a black bow headband. And of course… some amazing fishnet stockings. But so many other celebs have rocked this chic look. Check out all of your favorite stars who have worn fishnets in our gallery above!

Halsey’s fishnet outfit is just another example of her showing her ex of three weeks, G-Eazy, exactly what he’s missing. Ever since they split on Jul. 6, the singer has been wearing the sexiest outfits that make it seem like she’s definitely tempting him. In fact, on Jul. 27, she posted a pic of herself lying on her bed wearing a sexy white bra and matching thong. However, Halsey has been somewhat pissed off about the way G-Eazy has been acting so soon after their split. “Halsey thinks the way G-Eazy is acting so soon after their break up is gross and a complete slap in the face of what they had with each other. She wishes he would lay low and not try to show that he is such a playboy already. She would have done things different,” a source close to Halsey told HollywoodLife EXCLUSIVELY. “Certainly people will think her being out with Machine Gun Kelly is a sign of the pot calling the kettle black, but Halsey is strictly friends with MGK, and she is single and not ready to mingle like G-Eazy is.”

Joining Halsey on this list is none other than Iggy Azalea. On Jul. 24, the rapper proved her booty-shaking skills by balancing a bucket of KFC chicken on her butt while wearing fishnets. While she was performing this feat, she was also posing near a private airplane — proving that you can literally do anything on a private airplane. But the list keeps on going. Tiny Harris did a fun photo shoot in anticipation for her single with Xscap3 entitled “Memory Lane” where she dropped it like it was hot in a sexy leather bodysuit accessorized with fishnet stockings. A friend Shakur Sozahdah shot all the behind the scenes action of the footage, which ended up on Tiny’s Instagram on Mar. 7.