Scott Disick has undergone yet another grooming makeover. After finally trimming his shaggy beard, now he’s grown his hair out almost down to his shoulders. We’ve got the pic of his new look.

Scott Disick sure has been a hair chameleon in 2018, both with his beard and what’s on top of his head. He’s been wearing his hair slicked back lately so when he stepped out on July 12 with no product in, his locks looked super long! The father of three took eldest son Mason, 8, out to lunch in Calabasas and was letting his mane flow, as it’s probably the longest we’ve ever seen on the normally super groomed 35-year-old. His hair is now practically down to his shoulders, and we’ve gotta say he looks super sexy! Mason looked happy to be back home in California after spending last week in Capri with mom Kourtney Kardashian, 39, and her boyfriend Younes Bendjima, 25. That fancy yacht life is nice, but nothing beats the comforts of home for a kid.

Scott is back in the states as well after spending a week in Greece with 19-year-old girlfriend Sofia Richie. The Lord shared a pic from their vacay in Mykonos on his Instagram, but his hair was super slicked back so fans weren’t able to see how long it really is now. It seems like his hair grows really fast, as in an IG photo he shared just three weeks ago on June 20, it was nowhere close to the length it is today.

In that pic Scott debuted his latest makeover where he had his previously shaggy beard neatly trimmed down. Thank goodness. It was getting pretty scraggly. He was finally back to his dapper ways, sporting a peach colored suit, cool shades and luxury loafers while leaning against a classic Mercedes. Now he’s looking like a surfer dude with his long mane! Maybe he’s going to get in a hair growing contest with youngest son Reign, 3, whose locks are halfway down his back. 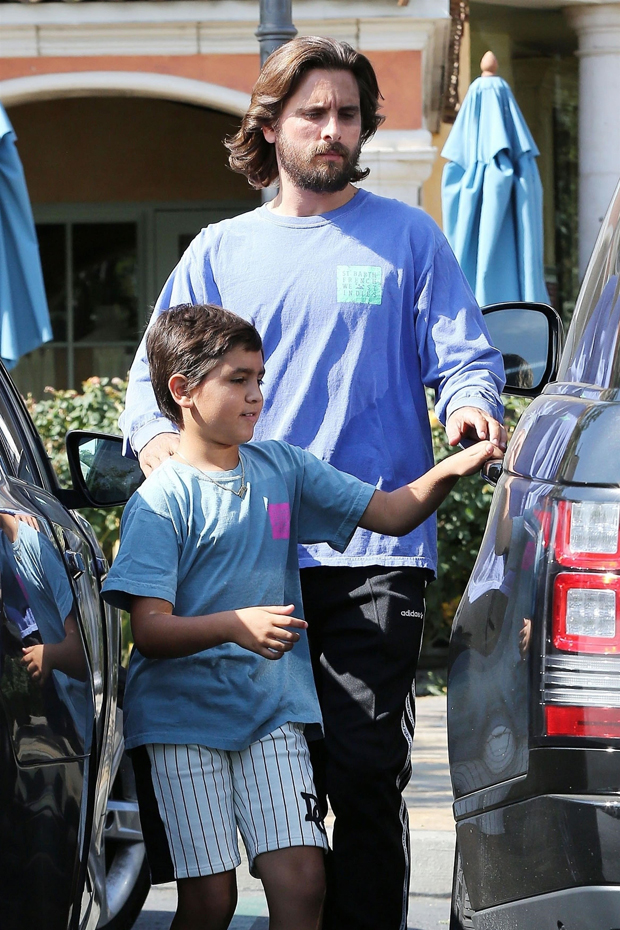 Scott looked every bit the adoring dad, putting his arm around Mason as they walked from the restaurant to the car. His son was all smiles in a pair of shorts and a t-shirt while his pops was equally casual in track pants and a long-sleeved shirt. It was a father and son trip only, as daughter Penelope, 5, Reign and Sofia were nowhere to be seen. Bonding time is always special.