After GF Sofia Richie begged Scott Disick to get rid of his shaggy beard, he finally made a trip to the barber shop and got a good grooming, cleaning it up immensely. We’ve got the makeover pic.e

Scott Disick is back to looking like his handsome, well groomed self after finally ditching the shaggy beard he’d been growing out for months. There’s no doubt he’s skilled at growing facial hair, but it was really looking overgrown lately. Girlfriend Sofia Richie couldn’t stand the beard, as who would want to get kissed with that itchy thing around his lips. The 35-year-old finally got a good close shave on June 20, and showed off his neatly trimmed look via a pic on his Instagram account.

Even Scott seemed to realize the shaggy beard was totally not on par with his brand of loving the finer things in life. He captioned the photo “The lord is back,” while showing off his much improved facial hair situation. He wore a crisp peach colored suit and white shirt in the photo along with a pair of black designer loafers. He was leaning against a classic Mercedes, looking very much like the luxury loving, well groomed Scott that fans have come to know and love. He had given a hint earlier in the day that something was up, posting an IG stories photo in a barber’s chair, and we love his new and improved beard! 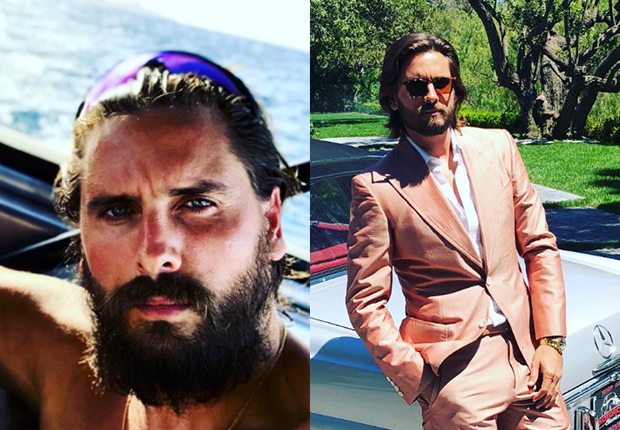 This is particularly good news for 19-year-old Sofia as she couldn’t stand the father of three’s wild beard. “She suggested he tame his facial hair or at least trim it down a little which he did not like at all. Scott can be really sensitive sometimes and he does not like to be told what to do or how to look. Scott takes pride in his style too and he snapped at Sofia for implying that his beard needed to be cut,” a source close to the model tells HollywoodLife.com. EXCLUSIVELY. “She thinks he is usually really sexy and she was just trying to help. She will think twice before ever offering grooming or style advice to Scott again.” Maybe Scott took it to heard as she finally got her wish!